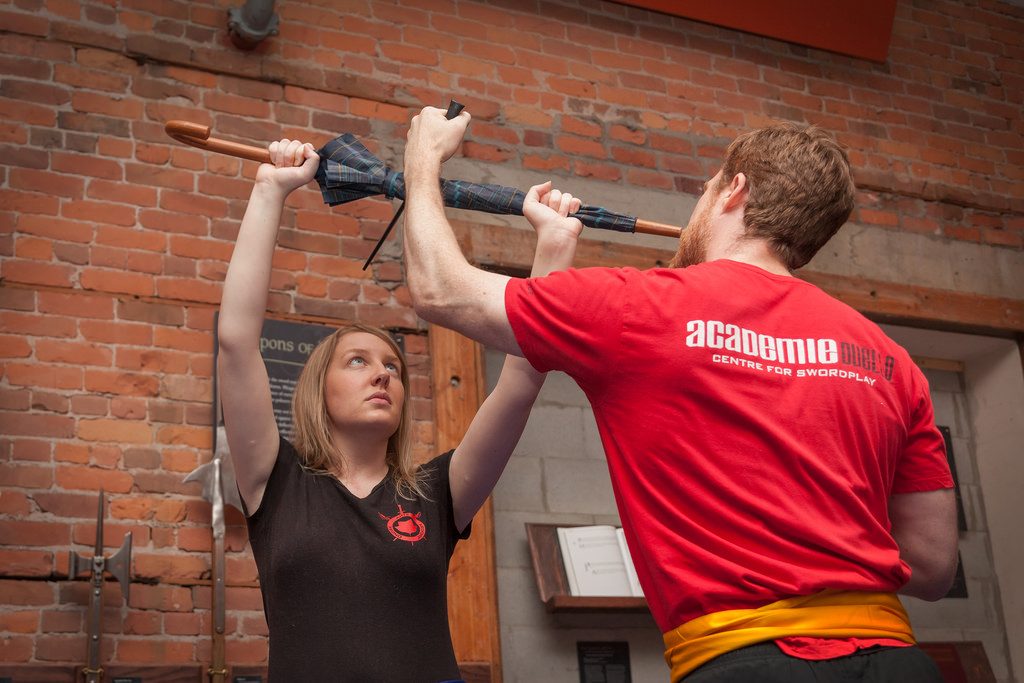 My apologies for the brevity of this edition of Sword Press, but the recent world situation and the concurrent obligations of service took my attention elsewhere for most of the month!

The home salle (Academie Duello) hosted manners-maven Jason Sarai, supporting him with their own umbrella combat expert David McCormick to provide an oh-so-Vancouver workshop on how best to use your umbrella in polite society — and wield it in those rare situations where one is confronted by a ruffian rather than rain.

Don’t text and umbrella. It’s grounds for the person you just blundered into to pull their sword!

School’s In for the Season

Somehow I missed this event in my own backyard….

The Niagara School of Arms recently presented some of the techniques that they practice, which are based on the grappling and weapons-use teachings of the 15th century Medieval Italian knight and fencing master, Fiore dei Liberi.

But the complete understanding of Fiore’s system by just using his fightbook has some pitfalls. “The Italians like to tell how good they are and then only give you one picture,” commented Master Unruh. Understanding where one picture from the tome fits into previous and subsequent moves can be challenging, and open to individual interpretation.

We’re all in this Together

The Chemnitzer Schloßbergmuseum and a city university recently held an academic research day, where the discussions centred on medieval fightbooks. Amongst the “revelations” — of which we already know were that men at arms were actually quite agile within the 35 kilos (75 lbs) of armour spread across their body and that different swordmasters writing at different times and from different regions sometimes came to similar conclusions about how best to approach some swordplay challenges.

And why is this important? Apparently there is at least one HEMA group in Germany that has over a thousand members, just waiting for the results of this conference to be disseminated.

Battle of the (Scottish) Nations… “real as it gets” tournament action!

Kiwi Understatement: bruises… but it’s not the injury expected when you “hit somebody in the face with an axe.”

Arrow to the Knee? Nope… Spear to My Back… and My Gut… and….

Apparently, the United States Navy has the last word in zombie dispatching.

Sword Drill for all Ages!