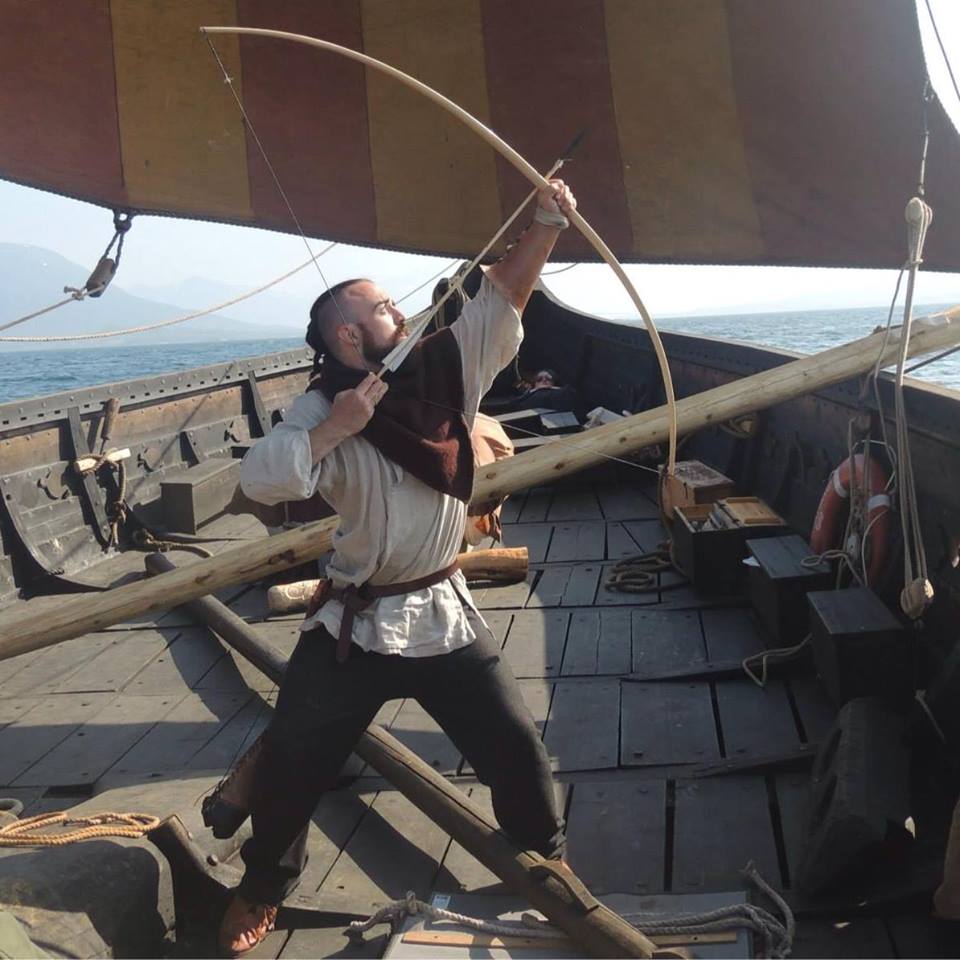 Whenever a new historical drama breaks we tend to question its historical authenticity, and that’s a good thing. However even with a critical eye unfortunately we invariably end up internalising something of the narrative and this can have lasting consequences for our understanding of history. Anyone in historical martial arts can relate to this, whether it’s the myth about ‘blood grooves,' misconceptions about the weight of swords, or people's obsession with weapons that are not only fictional, but also kind of  stupid. It’s frustrating to say the least. Previously this blog has explored some of the facts and foibles of the Vikings TV show, and to celebrate this seasons premier I was lucky enough to sit down with Stephen Fox, experimental archaeologist and Viking archery expert to talk about Vikings (The people), Vikings (The TV show) and where those two things intersect each other.

Stephen doing what he does best on a replica viking longboat.

Academie Duello: Tell me a bit about yourself.

Stephen Fox: I am a PhD Scholar at UCD School of Archaeology, where I study at our Centre for Experimental Archaeology and Ancient Technologies, the only on-campus experimental archaeology research facility of its kind. Here various kinds of archaeological projects are carried out on a daily basis, like stone tool making, pottery firing, bronze casting, archaeobotanic research in several of our reconstructed buildings like the Mesolithic hut, the Early Medieval Irish roundhouse that was completed in 2015 and our next big project which which is a type 1 Dublin Viking Longhouse.

AD: How did you get into Experimental Archaeology and Viking archery?

SF: I discovered Experimental Archaeology during my undergrad. For one assignment, we were required to choose a type of artefact, like a tool or some kind of other archaeological process, which were asked to replicate and write into a project. I had recently been to Bolzano, a town in the Italian Alps where the 5,300 year old Glacial Mummy, Ötzi, was discovered. I went into the Museum to see his mummified body, but at the centre of the room, surrounded by all of his personal possessions, was his bow, simply commanding the room. I instantly knew what I wanted to make for my assignment. That was the first bow I ever tried to replicate, and from then on Experimental Archaeology and particularly archery and bow-making have played a huge role in my research. A year later I was beginning my MA thesis and had a very rare opportunity to handle some of the bow fragments that were discovered during the Viking Dublin excavations and also got to handle the Ballinderry bow, one of the only surviving Viking Age bows in existence today. From looking at those pieces in the National Museum of Ireland, I pieced together the process of Viking bow-making; a craft that has taken me to quite a few places so far, most recently to Vancouver, where I was invited by Patricia Gonsalves at Lykopis Archery to give a workshop on 'How to make a Viking bow’, but most notably, my last two summers in Northern Norway, where I built a medieval workshop in the Chieftain’s reconstructed longhouse at the Lofotr Viking Museum; making replica bows and arrows and talking about Viking archery to thousands of visitors a week.

AD: What do you think is the biggest misconception about Viking culture today?

SF: The 'horns on the helmet’ thing is just the tip of the iceberg! Working in a museum that regularly receives visitors of many nationalities a day, I’ve heard some very interesting things. Many non-Europeans are surprised at how integrated Later Scandinavian settlers were in Medieval Ireland and England, that towns like Dublin and Waterford actually have a Viking origin, or that for half of their existence they were actually Christian. Coming from a completely different side of the world, many non-western visitors had never heard of the Vikings and with our reenactment clothes of linen and wool, looking no more than simple traditional clothes, some even interestingly asked whether we were part of a living community, like a First Nation’s reservation or a similar culture to the North Norwegian Sami people.

But like with any branch of the human past, the more we enter into the story of each culture the more context we create, the more biases we correct and the more we begin to understand the realities of daily life in the past. That’s where Experimental Archaeology and public interaction comes to the forefront of understating ancient technologies and processes. The moment I pick up an ancient or historic tool that and use it, my entire understanding of that object and craft begins to instantly expand.

AD: Why do you think those age old misconceptions persist?

SF: You will always get the typical misconceptions like, the old ‘horns on the helmets’ thing or the ‘raider or trader’ argument. Probably because people are most likely to first see Vikings in cartoons as children, as I did. But these misconceptions  aren’t ever discussed by archaeologists today. No, when you work everyday in a facility like UCD, alongside lifetime specialists, you get to hear far more interesting discussions, on topics like social identities, trade, exchange, gender, self expression, religion and spirituality or, of interest to my own research, craftsmanship and skill. Not just what tools are being used, but the conversation that occurs between a craftsperson and their raw material through a chosen tool. This is where we can start to look at how skill leads to finesse, from which an art begins to emerge.

AD: Do you think there is value in this sort of TV show for the archaeology community?

SF: Well, I wouldn’t recommend that a scholar use ANY TV series as a primary source. However, the show has brought about much discussion among colleagues, from which I nearly always learn something new.

While I can’t say much on the authenticity of materials outside of any bows and arrows depicted on the show, I do personally enjoy seeing the hustle bustle of daily life in the Viking Age that the show creates. It’s easy to get bogged down in details, and often difficult to piece together a ‘full’ picture of the past. But for me, the show does help to build an image of what some of the activity in Viking Dublin may have looked and sounded like.

To a public audience who may risk believing some of the things they see on TV, I believe it does bring the public's attention to this fascinating time in European and Scandinavian history. Many of the people who walked through the museum in Norway, particularly those travelling from outside of Europe, had never even heard of vikings until they saw the TV show. And many of those had included our museum in Norway in their travels; the show inspired them, but they came to our longhouse to learn more!

AD: Unlimited budget, complete creative control, what would your ideal historic television drama about the vikings look like?

SF: A gripping story is one driven by its characters. TV shows like Game of Thrones and The Walking Dead all share something in common. Their characters are so developed, defined and independent, that you could uproot them all from their environments: Late Middle Age Fantasy, Zombie Apocalypse, doesn’t matter. Their stories would still hold up. Unlimited budget and complete creative control? I would make a Viking show set in an unknown town, maybe one we haven’t found yet. I would not restrict the writers' creativity by retelling a saga story, but give them a whole new set of characters, with varying degrees of morality and  personality; morals and personalities that will be tested by challenges. Maybe they are in the middle of a war or a plague?

Although that said, it's probably best I never get to make such show, because honestly, my ultimate version of The Vikings would have way more Zombies!

You can read more about Stephen’s adventures in experimental Archaeology on his blog, here.