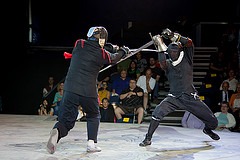 After their first night at sparring, a new student of mine engaged me in a conversation. He had enjoyed himself, but felt like he was flailing and a bit out of control. He thought perhaps he should return to simply doing drills for a while.

Sparring is one of the primary ends of our art. It should not be omitted. It’s fun, and it is the best environment to test technique. Now that does not mean that it is all there is, or that it is where you should spend all of your time.

Here’s what I told him:

Get out there and fence. Fence for the joy of it, fence to learn, and fence because it’s what this art is about.