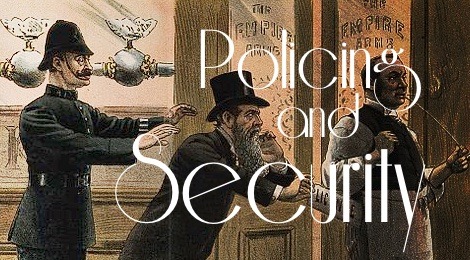 E. W. Barton-Wright wanted “to impart to peacefully disposed [people] the science of defending themselves.” Bartitsu has been used by various groups including police and security forces, as well as Suffragettes who were defending themselves against the police.

I’ve worked in security since 2009, and it is important to follow the Use of Force model to avoid escalating a situation. Even in dangerous situations, security officers are forbidden from using painful joint locks or choke holds, and Canadian security may not carry weapons of any kind. Our police carry handguns and different non-lethal accessories.

I wrote about this previously from my point of view as a fight director for film and theatre. I wanted to improve the realism of scenes that involved police violence. Let’s revisit the ASLET Use of Force study and what it can tell us about good Bartitsu training.

The Use of Force Study

Five scenario patterns accounted for 95% of the altercations: “Within each of these five patterns, a description of the most frequent first, second, and final combative action was generated by the computer… Four combative actions by suspects accounted for almost two thirds (65.8%) of injuries; the officer was kicked 23.4 percent, punched 16 percent, thrown/tripped 15 percent, or was bitten 11.4 percent.” The thrown/tripped statistic includes injuries sustained from wrestling on the ground.

As for the five patterns, they were:

The last one may be a bit misleading, since my first interpretation was: “Subject took a fighting stance, but before he could attack, the officer struck him once and that ended the altercation.” It is far more brutal when you consider that the scenario could equally be interpreted as: “Subject didn’t attack, he clenched his fists and looked angry. The officer struck with the baton repeatedly and met no resistance.” He didn’t have to take the subject to the ground or handcuff him as in previous scenarios because the baton hits were severe enough to knock them unconscious or make them cower.

If you’re in security or policing, you can take those statistics as a straightforward description and train your joint locks and takedowns from the positions described.

If you’re one of my average students, the lessons are buried in the data. If we start with the last scenario, we see that strikes with a baton or your walking stick can be very effective at ending a fight in your favour. If you’re unarmed against a stick or baton, you need to be very careful. If you’re fleeing from violence, make sure you have a good head-start and they cannot chase you effectively: knee strikes and takedowns will give you the space to escape instead of merely running. Finally, you should take these statistics as evidence that joint locks should lead to takedowns, and practice your escapes as well.

If you’re living in a place where there are corrupt or illegitimate police, they may have been trained for these scenarios. Make sure to study these tactics to surprise your assailant and present them with a scenario that they can’t handle.

The study also included the percentages of injuries based on targeting of the attacks. For example: kicking resulted in injuries to the legs (36%), the head (27%), the rib cage (22.5%), and the groin (14%). Although several fractures occurred, the most common injury was a bruise to the legs, head, ribs, or groin. The most common injury suffered in ground fighting was a strained lower back.

Although police and security do not officially train in Bartitsu, I believe we share the same goals and many of the same methods: to end violence quickly using proven techniques but without unreasonable harm. We are interested in the safety of all including someone attacking us. In order to do so, we continually study and practice in a realistic and systematic way.

A new Fight Like Sherlock Holmes introductory course starts this week. Sign up for Mondays, Wednesdays or Saturdays for one month of lessons in Bartitsu to learn scientific and practical ways of defending yourself. You can register online here!