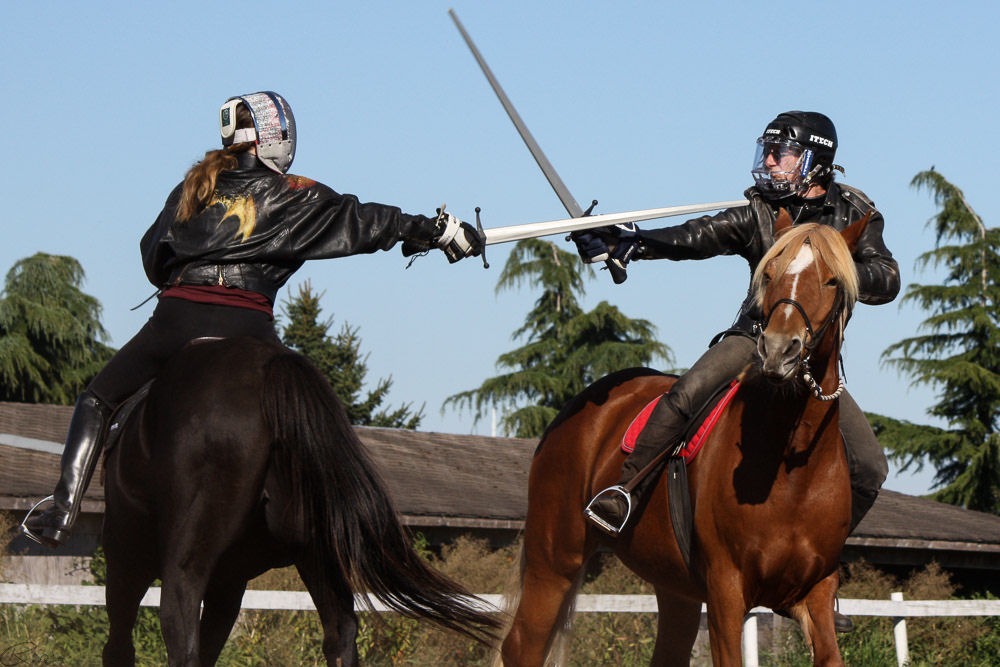 This week we’re excited to launch a brand new Mounted Combat Class for participants of all levels.  The five-week course will prepare students to take part in our annual tournament at Carosella 2015.  There are two levels to the course:

Participants at this level will practise from the ground and the falsemount to achieve the combat skills needed to attain the rank of Green Spur and participate in Mounted Sparring clinics and tournaments.  Students will learn the basics of single-handed longsword, including:

Students who have their Riding and Horsemanship Level 1 and who attend all five classes can reasonably expect to attain their Green Spur by the end of the series.

Students who already have their Green Spurs will practise from both the ground and from horseback as they work towards the combat skills for the rank of Blue Spur. These include:
Participants who do not own or lease a horse may use a school horse for an additional $40 for the series.
Prerequisites: Green Spur
cost (own horse): $120 + gst
cost (school horse): $160 + gst
Individual classes at either level, space permitting: $35 each + $15 for use of horse if required.
For a little taste of what our Green Spur tournaments look like, here’s a montage of clips from our playday on Sunday as well as Carosella 2013 & 2014:
Mounted Combat

For our August Playday last Sunday we ran Mounted Games in two-rider teams, and then added individual rankings from Horseback Archery and Mounted Sparring to determine the overall victors of the day.

Horseback Archery: This was best of two timed rounds to hit the target with a single arrow.  First place went to Isabel Landels on Princess, with a time of 7.63 seconds, Eleanor Landels was in 2nd with a time of 7.70 s and I was 3rd on Winnie with a time of 8.48 s.

Mounted Sparring: Due to missing equipment only two of us were equipped for sparring, so Karissa and I ended the day with a friendly match of three 30 second bouts.

This meant our overall winners for the day was the team of Karissa & Isabel, who win bragging rights and free entry into our next playday.  Congratulations to all!

Special thanks to Ben Davies who was our timer and score keeper, and to Christian and Laura who helped with set-up, take-down and referreeing.