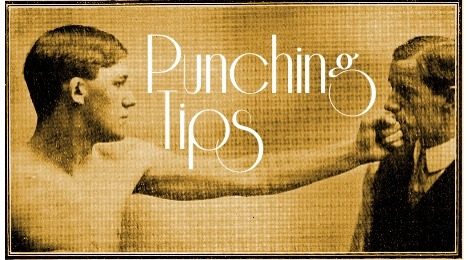 I’ve noticed a bunch of videos in my news feed recently about punching. If you want to improve your hand strikes, check out these tips:

Punching with the hand that is already forward is known as a jab in modern boxing. It’s considered a light punch because there’s not much room to accelerate and an inability to put your bodyweight behind it. At least, that’s the opinion of modern boxers.

Bare knuckle boxers know that the lead with a lunging step can span a larger space and put the entire body weight behind the punch. Wing Chun uses a similar punch, which Bruce Lee called the “one-inch straight blast” in Jeet Kune Do.

Here’s some good advice on that from a Wing Chun perspective:

Transfer energy from your rear leg through your hip to your spine, and then through your shoulder and extended elbow into your target. If you add a forceful leg motion to put more bodyweight behind it, you’ve got pugilism’s lead punch.

Other videos from this channel alternate between Wing Chun and Aikido with two main instructors. Some of the advice is great, and some is opinion and preference.

A straight punch while rotating is called a cross in modern boxing and simply a “right punch” in some older schools. It is considered to be the most powerful punch you can deliver, and can easily end a fight.

Without further ado, here’s almost exactly what I teach:

Are You Even Punching Correctly? w/Trainer: JT Van V

Shane has a lot of great videos on his channel Fight Tips. Some other recent boxing-related videos include:

If you have the patience for a long-form video lesson copied from VHS with low resolution, I highly recommend Old School Bare Knuckle taught by Carl Cestari:

Punch in Combination with Kicks, Grapples and Weapons

Bartitsu Fundamentals begins at the start of every month. Join us to learn the fundamentals of scientific self-defence next week on Wednesday, 30 September 8-10pm or Saturday, 3 October 2-4pm.