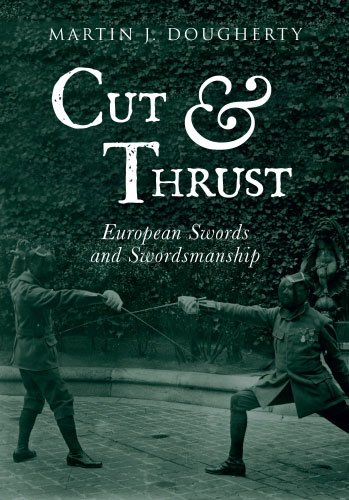 This recent inclusion to the HEMA body of common knowledge is very much a ‘beer and peer’ book. That is to say, you can open the book into most any chapter, and find a statement or assessment that should lead to intelligent debate among your knowledgeable sparring partners.

In ‘Cut & Thrust’ Martin Dougherty describes his take on how the art of western swordplay developed; discusses sword development, cultural influences and the influence of fight books; the cut versus thrust argument through history; and ends with his prediction of future challenges for HEMA … and Olympic fencing.

For the most part, the chapters are chronological – taking us from the gladius, dark age swords, chivalric blades, the Renaissance, to the time of the small sword and finishes with the modern era. His chapter on ‘cutting swords’ is an exception, Dougherty preferring to concentrate for once on a specific type of sword rather than a time of usage. It’s a good choice for the specific subject.

The illustrations are restricted to photography of the author and a peer demonstrating offensive and defensive concepts; and are clear, well described and relevant to the main text.

Interesting points for ‘Stammtisch’ discussion include:

‘Cut & Thrust’ is a thoughtful, easily-reading background to HEMA for both the novice and the experienced practitioner. It’s detailed enough to be a useful ‘study of the basics’, and yet addresses longstanding or seldom-discussed HEMA points of academic contention in a respectful, supportive but definitely ‘this is my position’ stance.

We’ll leave this submission with a piece of practical advice on how to handle the swordplay-firearm overlap of Victorian times:

“During the colonial era it was not uncommon for an officer to have his sword in his strong hand and a revolver in the other. One common – if hardly fair – technique was to parry an assailant’s attack with the sabre and shoot him with the revolver. However, since there was little chance to reload in a close action, shots had to be husbanded for an emergency.
One interesting piece of advice when confronted by an enemy swordsman was to engage his blade. If his engagement was heavy and clumsy, the advice was to fight him with the sword. If he engaged in a light and subtle manner, the officer would shoot him since he was obviously a skilled swordsman. ” pp. 170-171