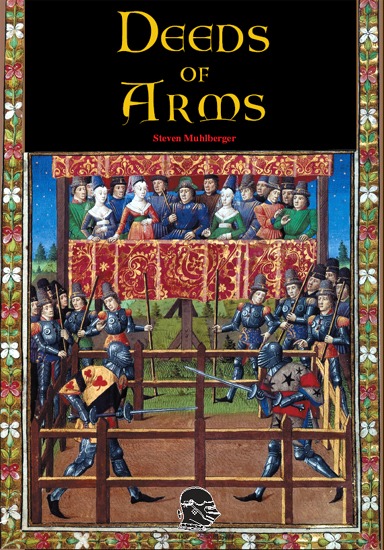 “They are stories about stories.” [1]

It does my heart good when I hear competent people say that they’ve recreated the essence of some medieval martial art event to the best of their ability, because they followed the descriptions of medieval combat “exactly” from period texts.

But what if the reference book is not completely correct about the event it describes?  What if the author had written a version of the event he witnessed that was “flavoured” by a political or social leaning?  What if he wrote of an event based on his interview of someone who had (allegedly) witnessed the event?  And even if the author penned a totally neutral recollection of an event, did he truly understand the nuances of the combat that he was witnessing? (Think of when you as sword scholars see swordplay on television, and your “recollection” of what went on compared to that of your swordless peers).

This is the conundrum that the eminently qualified and respected medieval historian Muhlberger brings to our attention in well-documented and easy-to-read detail.

In the first half of the book, Muhlberger focusses on the period of the Hundred Years’ War following the battles of Crécy and Poitiers (1350-1400). Using period recollections of “deeds of arms” (conflicts fought by prearrangement and within agreed upon limits), Muhlberger explains how tales of combat came to be so important for 14th century French literature … and for the medieval man-at-arms’ “sense of self”. [2] More importantly for us, he goes on to describe just how period writings concerning these events were influenced by a great variety of political, social or personal influences on the writers during this period. (Apparently, even back then, authors expected to be paid for their original work.  Who knew?)  With the aid of this information, Muhlberger guides us to a more careful consideration of how we interpret what really happened in any particular mêlée within the context of medieval politics and culture.

This is not a “fight book”, and it is not a history of historical duels; but it is a description of how period authors wrote about “deeds of arms”, and why the styles they used were fashionable.

The book is divided into sequentially supporting chapters, each of which I found could stand alone as independent studies in their own right.

First we learn of the risks undertaken by men-at-arms when one actually engages in physical combat, both in duels and war. (We do get a nod to select fight books here.) [3] The reader is introduced to the concept of “formal duels”, and extant variations on the theme.

Next, Muhlberger gets into the meat of his proposal with his examination of writings featuring the combat of “Thirty against Thirty” in 1351, examining in detail the confusion and discrepancies in recollection caused by passing time and the use of second hand accounts — and how sometimes the story of an event became more important that the actual event.

The chapter entitled “Will a Frenchman fight?” is most illuminating, demonstrating unequivocally that while the French Royal Army of 1380 was not famous for seeking battle, there were lots of French men-at-arms throughout the land ready to remind Englishmen that (to paraphrase a great film) “[their] mothers were hamsters and [their] fathers smelt of elderberries” … and were willing to back that challenge with one-on-one cold steel.

“Deeds of and Careers in Arms” describes how our protagonists built wealth and reputations during deeds of arms, and how the chroniclers of those deeds became our first “spin doctors”, worthy of employment in any modern PR company.

To finish, we are presented with period impressions of the four royal jousts conducted between the years of 1389 and 1390 during the “good peace” … though the intensity of combat during one tournament appeared to be equal to the combat seen in any war.

A reading of Deeds of Arms would serve well anyone trying to recreate historical events in modern times.  Any historical reference that a modern scholar may wish to use as “canon” is apt to be slanted in its representation of any past event — even if written with the very best of “neutral” intent and desire for accuracy.  Read the old manuscripts, yes.  But remember that when we are looking for guidance on how things happened in medieval times, a manuscript only tells us of one person’s recollection of “historical truth” and that any manuscript — regardless of its detail and “accuracy” — must be interpreted as part of a greater regional and situational historical record.