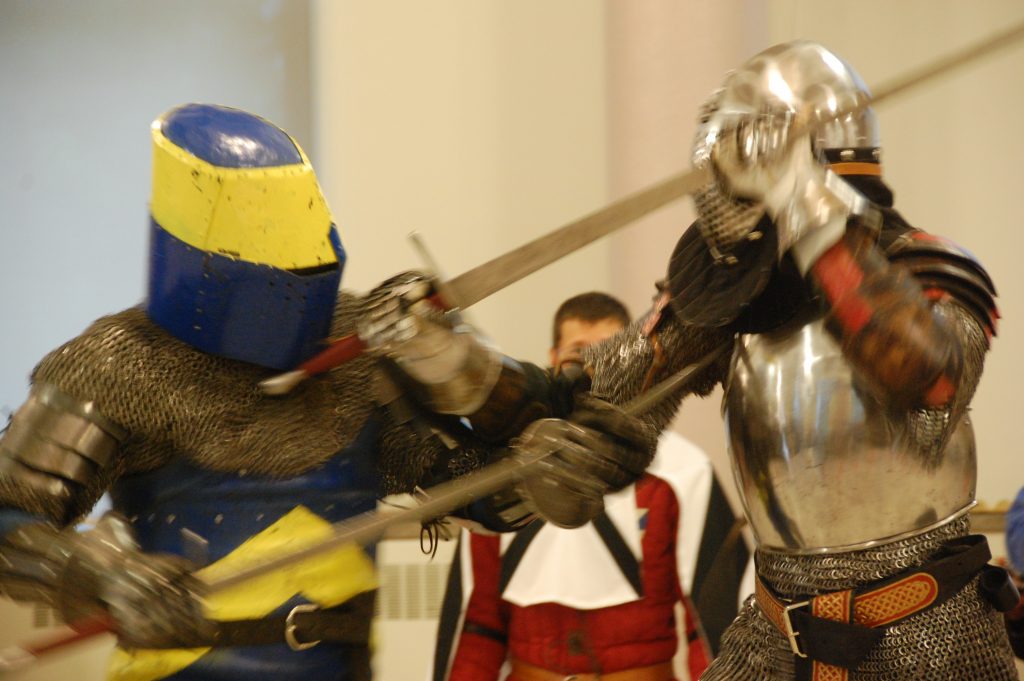 I returned home this past Monday from the excellent Borealis Swordplay Symposium in Ottawa which was hosted by Jason Smith and crew of Ottawa’s Les Maitres d’Armes. The event was two days long with day one focusing on 2-hour workshops and some room for free fencing, and day two focusing on a day long unarmoured tournament, an armoured tournament, and a free fencing block.

I must start by saying that running an event that hosts both international instructors and students is no easy feat and to make your first event go as smoothly as this one is worthy of praise just on its own.

There’s a nice selection of pics from the tournament both armoured and unarmoured on Flickr here.

There were two tracks of workshops and a roster of 5 instructors and 1 lecturer. The three guest instructors were Greg Mele of the Chicago Swordplay Guild, Sean Hayes of Northwest Fencing Academy, and myself. Each of us taught a 2-hour workshop which included the topics of Fiore’s sword in one hand (Greg Mele), Armoured combat with the half sword (Sean Hayes), and Fundamentals of Bolognese Sidesword (Devon Boorman). We then team taught a workshop on applied combatives in the last block of the day. This workshop came together superbly and I hope the students enjoyed our joint efforts as much as we enjoyed teaching together.

I posted some videos pertinent to what I taught at the workshop as well as earlier in the week when I taught at the Les Maitres d’Armes’ Wednesday night class on Duello.TV here.

Les Maitres d’Armes instructors’ Jason Smith and Bernard Emmerich taught 2-hour workshops as well on pommel play with the longsword and longsword strategy, respectively, and lecturer Tasha Kelly presented her work on the deconstruction and recreation of a period arming coat.

I heard nothing but praise for the various workshops, in particular Tasha’s lecture and presentation of her recreated garment. I wish I had seen it myself as understanding how period arming clothes were made is really essential to understanding the art better and even simply designing excellent protective gear for modern practitioners. I’ll have to pick her brain later — as will all of you who missed it.

The tournament on day 2 was a very cool format that allowed for everyone to get a chance to fence with many others throughout the entire day, fostered clean practice of the art, as well as camaraderie between participants. Here’s how it worked:

Countries
Everyone was organized into four “countries”: France, England, Swabia, and Udine. The teams had approximately 10 members each, a team captain (Greg, Sean, Christian Cameron, and Myself), a team standard, as well as team marshals in sharp looking tabards with their country’s coat of arms.

All members of a team issued an individual challenge on a challenge roster. Your challenge on a roster included your name, the weapon/discipline you were prepared to receive (longsword, sidesword, sword and buckler, and spear), and the format you wanted to use (limited targets with no grappling, whole body target and light grappling, full body target and all out grappling with knives included). The team receiving the challenge would then go through the challenges and select members who would face each one.

Team captains helped coordinate the pairings and I think among all the captains we worked to ensure that everyone got the best fights possible based on their experience level, the challenges they wanted to face, and their particular expertise. I really enjoyed this aspect of things.

Resolving the Challenges
Combatants received 5 lives. The fighting went in a series of passes until one person had lost all of their lives. The remaining person then scored points based on the number of lives they had remaining. So if you struck your opponent the 5 times and during the passes they only struck you twice, you would score 3 points. This format was designed to reward people who worked to preserve their own lives at least as much as they sought to take the lives of their opponent. Les Maitres d’Armes had a sharp looking peg board that had 5 coloured flags representing the lives of each opponent. They would take flags out as hits were scored. This made it really easy to determine the current standing in a fight. I also enjoyed that blow calling was done largely by the participants with additional witness being given by the field marshal if there was confusion or disagreement.

Quality of Fighting
There was a great diversity of experience levels and backgrounds. Many people came from the local Ottawa area which has no less than 4 different groups. Many also came from abroad including upstate New York, Chicago (CSG members), Toronto, Montreal, and even Florida. I found of the many people that I fought and the bouts I watched that most people put a respectable priority to their own defence. There were very few double hits, which I truly appreciated.

The spear fighting in the unarmoured event was a little messy in that the combatants and the marshals seemed to forget that it was an unarmoured spear fight and I saw tons of hits completely blown off and many of the spear fights I watched went to the ground to resolve. I think this was largely due to some confusion on the part of participants about how to treat strikes with the shaft of the spear and what level of intention was required with the point to count for a hit.

The longsword and sword and buckler fights though were of high quality and I enjoyed the opportunity I had as a captain to marshal and coach my team members. I’d definitely participate in this format again.

At the lunch break of the tournament a group of about 16 of us got into armour and participated in a Pas d’Armes. The term Pas d’Ames means Passage of Arms (not “no weapons” as the French might seem to suggest) and represents a trial of combat whereby participants show their skill at arms with various weapon combinations to prove their ability and honour to those assembled. There’s quite a neat history to the original Pas d’Armes and the Wikipedia article on the topic is a reasonable place to begin learning more.

The Pas saw combats with longsword (held in the middle and used as a wrestling and tool to find weak places in the armour), spear, and poleaxe. This can be quite a dramatic form of combat to witness (and even more so to participate in). Unlike the ‘unarmoured’ tournament that occurred earlier and later in the day, in the armoured tournament traditional cleaving and thrusting blows do not count. One must find weak places in the armour, in between sections of plate, or throw the opponent to the ground or run them from the field to win.

In this particular event the winner of each bout was chosen by the cheers of the crowd based on their opinion of who dominated the fight.

I had a great time fighting Matt McKee and Chris Penny both who teach in the Ottawa area at Halfsword and Poleaxe respectively. They were both hard fought and fairly evenly matched bouts in the end.

At the end of the Passage all of us gathered together to vote for who we felt represented the prowess and ideals of the passage best. We short-listed three people: Jim Clark of Les Maitres d’Armes, Matt McKee, and Chris Duffy. Mr Duffy was given the accolade by the crowd for showing some incredible prowess on the field, in particular throwing another competitor by his head (as I said – dramatic!)

At the end of the day Les Maitres d’Armes provided us all with a free block to fence with all the people we missed during the regular tournament, including people on our own teams. In this time I managed to fight another 10 or so people at longsword, sword and buckler, and rapier. I also watched many different people in their matches. It was great fun, thanks to all who obliged me.

I really enjoyed the quality of the fencing overall. There were many different backgrounds and skill levels but I felt that nearly everyone involved was really trying their best to practice solid art. I also felt that everyone really had and excellent feeling of enthusiasm and desire to learn, which made every pass a joy. This says a lot for the culture of the group that hosted this event and what they imbued into this endeavour.

The winners of the unarmoured tournament were a gentleman named Maxime from Les Maitres d’Armes, who scored the most overall points. Team France (that I captained – yay!) for most overall points of all teams. And the most important prize, the Pinceps, given for the best showing of the art and its ideals was given to Rachel Beauchamp of Les Maitres d’Armes and was well deserved.

Thanks again to Les Maitres d’Armes for putting on such an excellent event and for bringing myself and my colleagues out. I’m looking forward to heading out to Borealis Swordplay again next year!