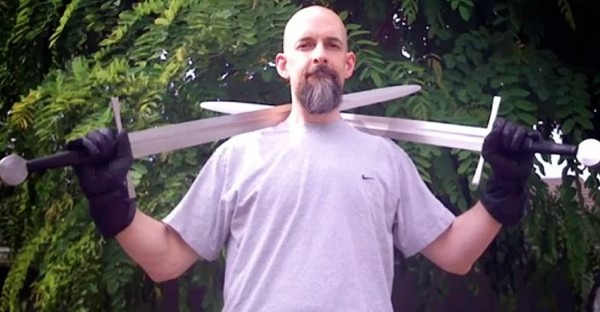 As I was flying out to the Western Martial Arts Workshop (WMAW) in Racine, Wisconsin this past weekend, many articles began whirling around the Internet about the demise of beloved sword fighting game initiative – Clang! I have been following this project closely as Neal Stephenson is a good friend of mine and a colleague in Western Martial Arts. I was disappointed to see such cynical comments coming out of internet pundits as I did not have the impression that the project was in jeopardy in any way leading up to the sudden news. I was looking forward to arriving at the workshop as I knew Neal would be there and that I’d be able to get a few words in with him and find out what was up.

So here’s the scoop. Neal and I chatted about the press coverage and where things were at with the game. The kafuffle really started when he let the world know through their KickStarter page that the money had run out and that the project was now in “evenings and weekends mode” till it secured its primary funding. This is actually completely in line with their expectations. Remember the goal of the KickStarter campaign was to build a playable that could be used to get larger funders on board — they did this! The fact that they have not secured funding as of yet is neither surprising nor particularly concerning at this point. In our conversation Neal mentioned to me that the irony of all this sudden bad press is that things are looking the best they have so far in their quest for funding. His desire when he shared the news of their current state was to keep people honestly informed — Neal is a frank guy who doesn’t mince words. He felt that he naively didn’t anticipate that people wouldn’t simply take him at face value that the project was moving forward and just waiting to get funding secured. Unfortunately people looked at his statement as a veiled or ‘polite’ way of telling the world that the project had failed. So the good news is that things are still trucking along and that the folks at Subutai Corporation are not worried — though I’m sure they want to secure funding sooner rather than later, and we also know that getting funding is neither a simple nor straight forward process.

As far the game itself goes, I have been impressed with the state of the playable and the diligent work that Neal and his crew have been putting in to try to truly emulate the feel of a sword fight. This is not an easy job and I can tell you I will be one of their most demanding customers. However I think this crew is going about their job in an enthusiastic and conscientious manner. I personally am looking forward to a time in the near future when I can take on my sword fighting friends in Europe without having to even get off my couch.