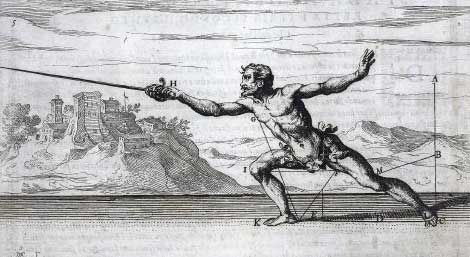 Welcome to the first full week of August.  Our Blue Cord and Red Cord curriculum works on a 9 month rotation and we’re back to month 1. In both our calendars this is a month on fundamental rapier. For Reds (level 3) we’re working on plays in various tempos and how to counter them. For Blues (level 2) we’re working on the nuances of the true fight (the strategy where you are always constraining your opponent’s sword) and the deceptive fight (where you are using a false movement to lure your opponent out of position). Greens (level 1) are working on fundamental cutting techniques with the rapier.

Those who are focused on the longsword are also moving into a month on tempo and provocation — the idea of making your opponent move based on an offensive or inviting movement that you make.
So enjoy this move back to the finer points of the art. Good training!

Though the rapier functions best as a thrusting weapon it can be an effective cutting as well when wielded with sufficient force and the proper mechanic. This month we focus on the mechanics of cutting and the right contexts in which to employ the cut.

This week we look at the various opportunities that exist at each measure within the true fight, including thrusts to the arm, cuts to the leg, and attacks that can be done to a retreating opponent.