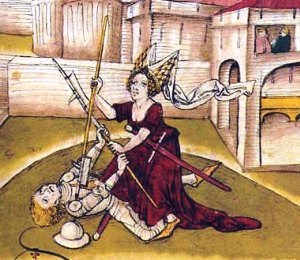 History has its share of colourful duels between men of all stations but they weren’t the only ones hurling down insults, hauling out swords, or trying to make new orifices in their enemies with pistols.  Here are five stories featuring some badass dueling ladies.

Seems that women have been cattily insulting each other’s beauty and age for centries.  In London, 1792 a Mrs Elphinstone paid a visit to the home of Lady Braddock and insulted her host having said, “You have been a very beautiful woman. You have a very good autumnal face even now, but you must acknowledge that the lilies and roses are somewhat faded. Forty years ago, I am told, a young fellow could hardly gaze upon you with impunity.”  Despite Mrs Elphinstone belonging to society’s upper class, the comment lacked both taste and class and angered Lady Braddock.  The women ended up dueling in HydePark to settle the matter.  They started with pistols where Mrs Elphinstone took the first shot and knocked Lady Braddock’s hat to the ground.  They then switched to swords where Lady Braddock struck a light wound to her opponent’s arm.  Satisfied, Lady Braddock returned home and Mrs Elphinstone sulked off to write a long letter of apology. 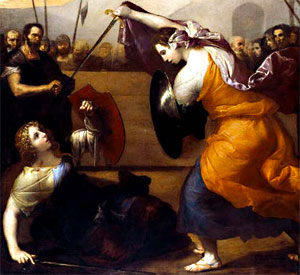 In a time when duels were often fought by men for a lady’s affection, these two women decided to switch the gender roles of the 16th century around. Isabella de Carazzi and Diambra de Pettinella had a very public duel in Naples, 1552 over the the highly sought-after bachelor Fabio de Zeresola.  Despite being in the eye of the public and on the tongues of gossips for years to follow the outcome of the duel was never recorded but, Spanish artist Jose de Riberta immortalized the story in his famous painting “Duelo de Mujeres” (“Duel of Women”) in 1636.  Much more romantic than “cat-fights” in downtown clubs between jealous girlfriends.

In 1886 Madame Astie de Valsayre and visiting American Miss Shelby took to the field of Waterloo (how significant!) to duel.  What caused these women to fight it out?  They had disagreed about the merits of French and American doctors and Miss Shelby insulted Madame Valsayre by calling the other woman “an idiot.”.  Miss Shelby was wounded in the duel, but managed to save face as it is reported that Madame Valsayre “warmly eulogized the conduct of the fair American and holds her up to the admiration and emulation of her sex”.  Now if only Miley Cyrus and Sinead O’Connor had decided to duke it out with swords and pistols as opposed to tweets and blog posts!

Catalina de Erauso was not happy with life in a Basque convent in the early years of the 17th century.  So, she ran away, donned the dress of a man and served as a lieutenant in the Spanish Army.  She gave herself the more masculine name of Francisco de Loyola though she is also known by her nickname La Monja Alférez, or The Nun Lieutenant.  She fought many duels as well as fought in the Arauco War serving under her own brother, a captain who didn’t even recognize her!  Her sex had been discovered on more than one occasion, but her fame seemed to save her and she was given a special dispensation by the pope to wear men’s clothing.  She left Spain in 1645 for the New World, took on the name Antonio de Erauso and became a mule driver.  How about that for blurred lines, Robin Thicke?

In 1892 the first “emancipated” duel- called such because all parties involved, including principals and seconds, were women- was fought in Vaduz, the capital of Liechtenstein.  Even more interesting is that the duelists were royalty.  Princess Pauline Metternich and the Countess Kielmannsegg disagreed over a flower arrangement for an upcoming musical exhibition.  Both the ladies were injured; Princess Pauline received a cut on her nose while Countess Kielmannsegg’s arm received a light wound.  The outcome of the flower arrangement, however, was never made known.