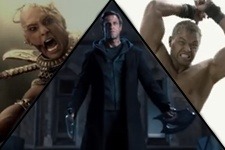 This week, we have three trailers of upcoming films that will hopefully have some great fight scenes. Let’s take a look at each of these trailers, and analyze what we can expect.

The obvious comparison will be to previous Hercules movies and the actors who have played the demi-god.


Why not try again? I don’t think it’s been done well yet.

From the producers of the Expendables… if you think that’s a good thing, then I guess this movie is for you.

You know what Gladiator had? Russel Crowe and Joaquin Phoenix, directed by Ridley Scott. You know what Troy had? Brad Pitt, Eric Bana and Orlando Bloom. You know what 300 had? Gerard Butler, directed by Zach Snyder.
I’m not saying that you need a big name in your lead role, but acting is required.
I’m going to wait for the Dwayne “The Rock” Johnson version later in 2014. There is no trailer yet.

Coincidentally, we’ve got the sequel to 300, which I naturally want to call three-hundred-two, but that sounds like it’s 302. I’m sure the producers agonized over that too.

300: Rise of an Empire Trailer 2013 Official Teaser - 2014 Movie [HD]
I’m still stuck at the title. Does anybody think that they’re trying to echo “The Empire Strikes Back” and trick us that this second episode will be as good?

They’re trying to top the fights in 300 by adding naval battles.

All sequels have to be bigger in order to overpower the general impression that all sequels suck. A wind is coming…

Let’s change the subject with some good-versus-evil mythological fighting… oh, did we already do that? Then let’s have more crazy!

From the makers of Underworld? I guess they know their fans. Although Vampires versus werewolves made some sort of sense. Gargoyles versus demons?

I really liked the original Underworld. Forget the sequels. The first one was visually amazing, had some great camera work and even had an ARG website where you had to pick a side before the movie even premiered.

Nothing but “fantasy fighting” in this one, and with the camera permanently attached to a quad-rotor drone, don’t expect to follow any of the combat anyway. The only thing worse than shaky-cam is the current crop of flying cameras with half of the scene computer generated.

This reminds me a lot of Constantine, so if you want to watch a fun movie about battling demons, I recommend this under-appreciated film from 2005: