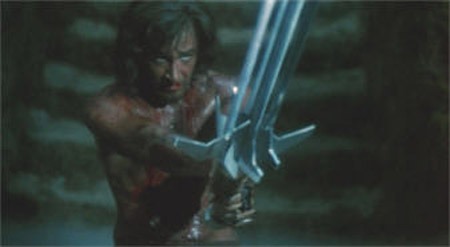 It is called a “fantasy” world for good reason.  When we turn to the fantasy genre when we play games, go to a movie, or read a book, we’re not looking for reality.  We’re looking to escape the world of the mundane and enter into a universe where anything can be possible.  However, sometimes it is hard for me to turn off this part inside myself that just wants to get up and shout “That is absolutely ridiculous!  Are you kidding me?!”

Here is a list of some of the most ridiculous weapons I have seen used in video games, movies, RPGs and cartoons.  This list could have easily contained a few dozen entries, but I decided to whittle it down to just nine.  This leaves room for you, the reader, to tell us what you think and what you would add to the list.

Is it a gun?  Is it a sword? Perhaps a weapon for those who want to bring a sword and a gun to a gun fight. Whatever it is, this weapon has shown up more than a few times in the world of Final Fantasy.  As someone who has handled her fair share of swords and a few guns in her time, though cool in principle, I just can’t seem to wrap my head around how it could actually be practical as both.

There is no explanation needed here.  It is exactly what you think it is and was first introduced in the video game Saints Row: the Third.  The above image has been censored for our younger readers.  I’m still shaking my head at this one.

The Sword of Protection

In the cartoon series She-ra Princess of Power the show’s heroine carried around her universe’s version of the Swiss Army knife for swords.  She-ra’s Sword of Power had the ability to transform into whatever she needed it to be. With only a command of her voice it could become a shield, rope, grappling hook and even a parachute.  Not going to lie, when I was a little girl I wanted one of my own.

In the popular MMPORG (massively multiplayer online role-playing game) Monster Hunter Frontier players have their choice from many different ridculous weapons they can use when going up against a plethora of frightening foes, including the simply named and self-explanatory Bow.  As a novice archer I have difficulty being able to keep proper form after two hours of shooting with a 25-pound draw weight.  I can only imagine how tired I’d be after letting lose a single arrow with that bow.

In Kingdom Hearts we find this particular weapon which still has me scratching my head.  Despite it’s name, I don’t really see anything blade-like about it.  I guess the name Key Blade rolls off the tongue better than Key Bludgeoning Weapon, though. 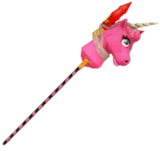 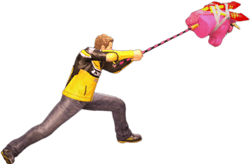 In the videogame Dead Rising Two: Off the Record, you’re able to kill zombies with more than your classic tried, tested and true weapons.  Meet Pegasus, an over-sized stick pony with rocket flares and fireworks attached to it.  Keeping yourself at a safe distance you can stick it into a zombie’s stomach (or what’s left of it) and watch the undead explode!

Ah, the Beverly Hills Cop movies brought us Eddie Murphy at his finest, one of the best film theme songs ever and, not too mention, this beauty from Serge’s Survival Boutique: the Annihilator.  My guess is the modern version of this weapon would likely have a built in MP3 player as oppose to the discman, and an i-phone charger built in alongside the microwave.  Check out the link below to discover all of the perks the Annihilator comes with!

This list wouldn’t be complete without it.  Now, even someone like me who often wields a spadone- an Italian greatsword- the size of herself (a whopping 5 foot 6 inches tall!) thinks the Buster Sword from the world of Final Fantasy is beyond ridiculous.  However, my fellow SwordFit coach and Warrior Fundamentals instructor, Griffin seems to think otherwise as can be seen pictured above at 2011’s Cascadia North Accolade Tournament.