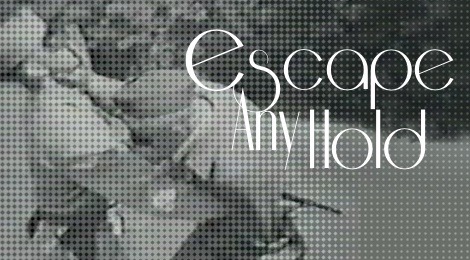 To be grabbed or pulled can induce panic even if it isn’t painful. You are trapped and it feels like a violation of your freedom. When an attacker grabs you, they have intent to follow that up with some other action. It may be to bring you with them, control your motion to make you easier to strike, or to twist that hold into something painful such as a lock or choke.

To escape an assailant’s grasp is a central part of jujitsu, and it may seem that there are dozens if not hundreds of complicated methods to learn. But there is only one important rule (react early) and three basic strategies: attack their hand, save your limb or strike.

In today’s article, I will outline implementation of this rule and accompanying strategies which will keep you safe in a real-life grappling situation. I will then relate them to the underlying principles we learn in our Victorian Self-Defense program, which, as many of you know, come primarily from Bartitsu, the mixed martial art practiced in England in the late 1890s and by students worldwide today.

As stated above, our overall rule against any attempt to hold you is to start your escape as early as possible.

The very earliest moment to be aware of a dangerous person and keep at least an arm’s-length away from them is when they start to grab for you; if you can, gain further distance and don’t let them succeed. It’s even better to stay out of kicking range.

If they are already close enough to grab, the next moment to react is as their hand approaches you: evade or intercept their hand before they get a grip.

If they have already touched you, your next opportunity is to use one of our strategies below to escape the grip. It may be your last chance, since a strong grip will be followed up with some other attack. That includes turning a grab into a lock.

A hand that grips, squeezes or twists your joints may be painful, but is not as dangerous as a lock. A lock, as the name implies, immobilizes the joint in such a way that you cannot free yourself. Locks work because your arm or leg is put in a position of weakness, usually at a limit of mobility, such as fully extended or fully contracted.

If a lock is fully applied, the only way to escape is to know a very specific sequence of moves for that particular lock, and even then, it may be impossible to get out.

The danger of the lock is that the position of weakness can be turned into extreme pain when the attacker continues to move the joint toward dislocation. These positions are called “keys.” When keys are applied to locks, the whole body is manipulated to move, such as when using a figure-four takedown.

Whether the grab is approaching, or they have just initiated a grip, the first strategy is to address the hand that is offending you. Taking hold of fingers or thumb can allow you to apply your own joint manipulation. Striking the wrist or elbow can disengage the grip, but it is not as reliable as an effective use of jujitsu.

Holds work best close to the holder’s body and away from the victim. From this principle, we can derive several tactics:

Save Life and Limb

If the attacker is attempting to upgrade to a lock, grab your own limb that is being manipulated. For example, if they are attempting an arm-bar, grab your hand or wrist with your free hand.

Bringing your wrist near your waist, especially with the assistance of your other hand, is the safest rule to follow to prevent a lock, using the principles of a proper hold discussed in the section above.

Of course, this doesn’t work against chokes; grabbing your own head will not help you.

Punch, kick, eye-gouge, knee strike–there are many ways to attack your attacker so that they abandon their plan to pull you. If they are using two hands to control your one arm, they are not able to block your attack.

Savate’s low kicks are especially useful when grappling. They do not require much room, and they are impossible to intercept.

Let’s reframe this discourse by taking a step back. Do you need to escape an initial grab immediately?

While discussing the back-heel throw in our first day of Fight Like Sherlock Holmes, we put it in the context of a common attack pattern: a grab with the left hand at the collar in order to strike hard with the right. If you were to focus on the grasping hand, you would already be hit.

The grab is not harming you. It is the next move that will harm you. That next move may be a punch, it may be a joint-lock, it may even be a kick or head-butt. So practice different scenarios with a partner to get used to the different follow-ups. Some may require a block, some a counter-punch or kick, but all will need awareness and practice. The grab to your neck, on the other hand, will be immediately painful and dangerous, so get it off you quickly.

Learning different ways of gripping, locking and choking provides you with options in applying them and awareness when an assailant is attempting them against you. However, practice is more important. There is a proverb that goes: “Would you rather face an opponent who has practiced a thousand kicks once, or one kick a thousand times?” Stay realistic.

And although the walking stick from Bartitsu is fascinating, it may be more practical in Vancouver to learn self-defense with an umbrella. We have a four-hour workshop appropriately called Umbrella Self-Defense on Sunday, 18 January. Sign up on the Duello website, by phone at 604-568-9907 or by dropping by 412 W. Hastings Street in downtown Vancouver.