If the movie ‘Wonder Woman’ has the legs to keep public interest (no pun intended) until October, ‘the’ Halloween must-have costume accessory of choice will probably be a sword sheathed, tied or taped over ones’ back.  Given the amount of imagination out there, we’re apt to see many variations of the theme that night as revelers move from party to party … often through busy streets or on public transit.  And from there, we have potential for sword-related problems.
If you’re one of those thinking of a sword-backed costume, Maestro Devon had some advice on how best to comport yourself in public if you’re ‘armed’, or carrying.

For the HEMA community, there is a tiny window of opportunity here … we might have random opportunities to engage with people with a new found interest in swords, and ask them; “Do you want to know how to use that blade (and carry it) for real? Why not join me at my salle?”
Last, if this potential of affixing blades to our 6 o’clock does come to pass; I fear many of us will be faced with that feared, no-win question from our newly-armed, concealed-carry partners …

The Minnesota Sword Club is a unique institution; it seamlessly joins both Olympic-style and HEMA swordplay within their program options. It seems to work, with head instructor Brandon Foat happily handling 40-70 students a month at various levels of expertise.
Of particular interest in the item is the emphasis on the need for academic study of the art, and the preference for KISS when actually engaging in it!
“(HEMA) It’s a nice conversation starter, you end up going out with friends at bars and it’s, what do you do for fun? I fight with swords in a sweaty basement.”

Schooled by the Spanish 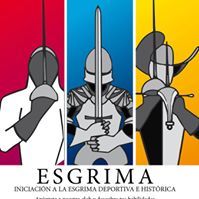 EL BIERZO NOTICIAS (León, Spain) 02 June 17 El arte de la esgrima
Our American peers are not the only ones combining the Olympic and HEMA sword disciplines. Spain’s Fourth International Seminar on Historical Fencing had been organised by the 54-member Caballos de Ulver. The mainly sword and buckler/rapier event was opened by comments from the president of the modern-styled Federación de Esgrima de Castilla y León, during which he emphasized the natural and enduring links between modern and historical fencing.
Apparently, there are 700 modern and historical ‘fencing groups’ in Spain

Wolfgang Abarts’ Lebendige Schwertkunst has been demonstrating and seriously studying HEMA for over two decades; and are perhaps best known in their community for their annual summer demonstrations depicting authentic medieval swordplay.
Abart emphasizes his groups challenge in trying to properly interpret a few lines of medieval text, maybe with a small sketch, to accurately recreate the graceful and powerful movements of a trained man-at-arms.

“ The Turk would never thrust, but instead would always use ‘the natural movement’, that is to say, he would raise his falchion, tricking his opponent to lunge, at which time he would sweep the falchion down and chop off his opponents sword blade.” [1]

I have long become used to Historical “European” Martial Arts being seriously studied and practiced by people that; by virtue of their culture, race or gender; are not thought of as “traditional” ‘knight’ nor ‘duelist’ material. I’m still pleasantly surprised however, when I read of HEMA-influenced groups being formed in countries that don’t have a ‘home grown’ European swordplay tradition (think of Japan’s Armored Battle League and some individuals there doing independent work.)
Devon’s recent item relating his visit to Istanbul and to the Tarihi Savaş Sanatları Derneği inspired me to cull Turkish press for the current state of swordplay in that country.

Turkey is undergoing an enthusiastic renaissance of popular interest in their traditional martial arts, or in their parlance ‘War Art’. For the most part, the revival is centering on rekindling equestrian archery and traditional bow archery, but swordplay too is being studied.
One scholar is trying to recreated the sword fighting techniques of the 16thC Ottoman warrior; elements of the Turkish Army train with traditional swords to develop fitness and martial attitude;  and there is a thriving market for traditional Turkish swords crafted the traditional way.
But a Turkish interest in HEMA?
Turkeys’ Istanbul (nee Constantinople) has a long and oft conflicted relationship with HEMA. The city was once the largest and wealthiest city in medieval Christian Europe before becoming the capital of the Ottoman Empire – and functioned again as a major cultural and economic power for the Mediterranean renaissance period. Traders, merchants, soldiers and mercenaries; most of whom carried one sort of sword or another, passed through this city as a nexus between Europe, Africa and Asia. Western rapiers, arming swords and long swords were no stranger to the streets within the polyglot Ottoman capital.
The initiatives of Devon’s hosts within the Turkish Association of Historical Martial Arts, and of smaller groups such as Kuzgun Akademi are very much based on a legitimate historical ‘experience’ with western European medieval and renaissance weapons  … and it will be interesting to seriously consider their views as to what HEMA is (was?) and how it should be reflected in the pan-HEMA community practice of the art.