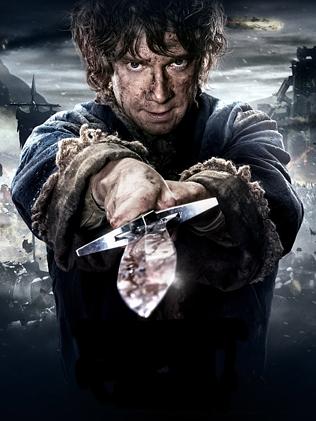 Everyone is buzzing about the release of the third installment of the Hobbit movie trilogy, set to premiere here in Canada on December 17th.  The Hobbit: Battle of the Five Armies is bound to be filled with all of the amazing special effects, big battles, and action that Peter Jackson is famous for. Even though Jackson’s Hobbit films have been nothing like J.R.R. Tolkein’s book, there is still a great story to be told inside the incredible and fantastical world of Jackson’s Middle Earth, one that has the ability to capture viewers and draw them in with awe and wonder.

As a western martial artist and instructor, I find myself dissecting the battle scenes of every movie I watch.  It is not uncommon for me and my HEMA friends to have epic rants (often over a few post-sparring beers) about the kind of fighting we see in films and television.  The Hobbit films–as well as Peter Jacksons’s Lord of the Rings trilogy–are no exception.  By no means are we putting down the movies, but as martial artists, we have definitely noticed more than a few flaws in the characters’ martial skills.

Below is a list of a few of the martial mistakes we have seen in the films.  Look for these–and more–in next week’s release of The Hobbit: Battle of the Five Armies.

Most people already know that movie archery is nothing like real archery.  What looks good on screen and what adds dramatic flair for movie-goers is not usually what will get a good archer a solid bull’s-eye on the range. The elven archers Tauriel and Legolas look great on screen, but let’s take a look at why their movie archery wouldn’t cut it off camera.

Stance and foot positioning are the foundation of good body mechanics for any activity, and archery is no exception.   If an archer’s stance is too open or too closed to the target they will have to twist their torso in order to get their arrows on target.  When we look at Tauriel and Legolas we often see that the two of them are hunched over, with Legolas even tilting his head to the side.  This is a great way to be able to see our actor’s faces, but it is poor body alignment which makes for improper alignment for the bow.

The grip is also important and is a key factor in aligning your arrows with your desired targets.  The hand around the bow should support the bow’s weight, but not be held in a death grip. When a bow is held too tightly it creates what is called bow torque, or a twisting through the bow, which throws the arrow left or right off of the target. A loose grip will allow the shooter to keep the sight on target and ensure a solid shot. Legolas’ character also has a bad habit of flinging his hand and flicking his fingers when he releases his arrow.  Now, this is done to exaggerate and highlight the fact the his character is shooting to the movie audience, since non-movie archery is often far more subtle.

Almost every movie with swordfighting in it is guilty of this: the huge wind-up before a blow. Now, from a stage combat perspective, doing a big wind-up is often used as a safety cue for the partner with whom you are performing your choreographed fight. An actor with stunt training will know that when creating a combative scene for the stage, safety should be every actor’s top priority, along with being able to tell an engaging story to the audience.  However, from a martial perspective, this big wind-up is a huge no-no.

There is a huge difference between fighting for your life and fighting for the stage or screen.  In combat, a large wind-up might generate a lot of power for a blow, but you are sacrificing and risking other things when you do so.  For instance, a huge wind up takes a lot of time–time where your opponent can react quickly and interrupt your action as you are in the middle of deploying it. When you are already committed to a large action, it is difficult to stop the momentum of that action once it’s begun.  The big wind-up therefore not only takes longer to do, but it also leaves the attacker open to taking advantage of the many juicy targets you have left exposed. (A big action like that takes your sword away from your body for a long time.)  I cannot tell you the number of times that both I and my western martial artist friends have shouted at the screen, throwing our hands up in the air as we moan and groan over how combatively ridiculous such huge wind-up attacks are–regardless of how badass they may look.

These were just a few examples of common combative mistakes that are often found in movies like Jackson’s The Hobbit. However, that doesn’t mean that we can’t enjoy the storytelling and allow ourselves to get lost in an epic fantasy world on screen. As a performer myself, I understand that we need to take into consideration the needs of the medium, which in this case is film.

What is Great about the Martial Arts in “The Hobbit”

One of the things that both The Hobbit and the Lord of the Rings movies do a great job of is telling the characters’ history through the language of the movements they use in their fight scenes.

Often films do a great job developing the history and cultural backgrounds of different characters, but then fail to bring that authenticity into their fight scenes.  Each actor develops an accent, ways of moving and mannerisms to tell the story of the character they are portraying.  However, when these two characters meet in combat on the screen, all of a sudden, we learn that they fight the same.  Even though a non-martial artist might not be able to pinpoint these specifics while watching a film, there is still a certain aspect to the story telling and character development that you can see is lost.

One of the things I love about The Hobbit is that when an orc goes up against a dwarf in battle, you can clearly see each character has their own unique martial arts style.  And you should!  The two characters come from completely different places in the world of Middle Earth.  They have their own unique languages, their bodies are completely different, the environments they grew up in were vastly different, and this you can see reflected in the unique way the two characters fight each other.  Much of this is due to the efforts and hard work of the Fighting Style Designers that Peter Jackson brought in for the first movies.  The team created fighting styles for each of the races of Middle Earth based on their history, weapon choices, and anatomy.  Our friend and fellow western martial artist Tony Wolfe was the head of that team.

Peter Jackson is known for directing some of the most action-packed, jaw-dropping, over-the-top battle sequences of the New Millennium and I have no doubt that Battle of the Five Armies is going to deliver just that.  I for one am looking forward to seeing the amazing battle scenes and fights in the new movie–even if the martial artist in me may cringe a little on the inside from time to time.