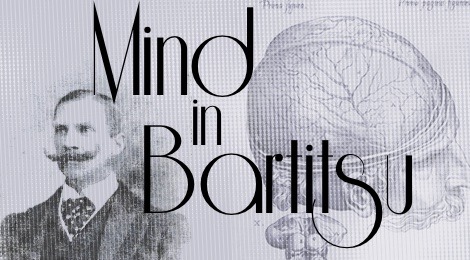 Our four-session introduction to Bartitsu includes the four component disciplines of the art: Jujitsu, pugilism, savate and walking stick self defence. However, there is a critical fifth component: the mind.

Your brain directs your body in voluntary actions, and control of your focus, awareness and choices is critically important in dangerous situations. Your assailant likewise has a brain that can be surprised and tricked to give you an advantage to compensate for their size and strength.

Planning ahead reduces your stress and can prevent a panic response. You can begin by becoming more aware of your surroundings and asking yourself who in your environment could become hostile. Where might an assailant be hiding? Keeping your distance from danger is a good response to these evaluations, but you don’t want to live your life in fear of every potentiality. A better response is to create a simple plan and be prepared if that person becomes agitated, or someone pops out from around that corner.

When you prepare mentally for your response, you will act instead of freezing. Focusing on your response is not only a more effective way of addressing danger, it also reduces the anxiety you might feel when you start thinking of the dangers lurking in the dark.

If you are faced with an angry person, their plan may include grabbing you, striking you, or pushing you off-balance. They are not prepared for an effective response from you. Disrupting their plan is immediately disarming. They need a moment to re-evaluate and deal with their surprise at your reaction. Do not give them that opportunity. Their pause is only a momentary halt to the violence they started. Use their surprise and pause to take your next effective action, not to wait for their next attack. Hitting them with a series of blows increases the probability that one will land. You can also plan a set of strikes instead of making them up one at a time after contact has occurred. Next, you might consider: what is your opponent likely to do? Do they have a habit? Have you got a counter prepared for that, which can be employed immediately without having to stop and think about it?

Putting your plan into action is a very satisfying part of the training process. You want to feel that your Bartitsu practice is giving you a good way of solving the problem of a particular attack or scenario. Thinking through an attacker’s intentions and intercepting their plan with the most reliable response will give you an “aha!” moment. That moment of discovery can happen again and again in class and in sparring as you develop better skills, smoother combinations and easier applications of leverage and momentum.

The goal of any martial art is to learn the best ways to use your body and weapons. In many cases, the principles by which those techniques are chosen are the same throughout cultures, even though the particulars are different among the arts: the physics of levers, angular momentum and human anatomy.

Using the fist, finger jabs or the stick, you can cause a flinch response in your opponent by striking quickly towards their eyes. The reflex to close the eyes, lean back and raise the hands is difficult to overcome, especially under surprise conditions. This psychological phenomenon is reliable, and the Bartitsuka can exploit it to gain forward momentum, attack low targets that are left open (the mark, the knees, etc.), or get some breathing room.

Understanding the elbow joint and the muscular attachments around it leads to a scientific way of improving punching power and the application of elbow locks, such as the arm-bar, the come-along hold, the figure-four and the kimura. Using simple physics, the elbow should be exploited as a double-lever for takedowns.

Angular momentum is the physical principle that dominates the scientific exploration of stick strikes. The central lesson is that angular momentum is conserved in a plane. Your vertical strikes therefore should not “helicopter,” but travel beside you. Likewise, any stick attack directed at you will have the most impact at the fast-moving tip, so always block as close to the hand as possible. (This is another way that stick fighting is exactly the opposite of sword fighting.)

The scientific method itself has some misconceptions among non-scientists. It is sometimes romanticized as requiring special equipment and genius intellect. On the other hand, it is sometimes derided as being theory-laden and not real-world enough. Neither of these is accurate. Science is a systematic process of trial and error to understand the world better.

When I claim that Bartitsu is scientific, I mean that I am willing to see other means and methods of delivering an attack or defense, and I will conduct trials to see if it can be improved. Repetition with variations will test whether a technique is reliable, and in what circumstances it needs to be modified or avoided.

Bartitsu is how E. W. Barton-Wright answered these questions from his research and experimentation, but our examination continues in the twenty-first century. In neo-Bartitsu, we study and practice self-defence and extend his work.

Once you have taken our introductory Fight Like Sherlock Holmes course, you’ll have your Green Sash, and the real training begins. Join our ongoing classes on Mondays and Wednesdays 8-10pm or Saturdays 3-5pm.

This is part five of a series on Bartitsu. Start at part one: Jujitsu in Bartitsu here.