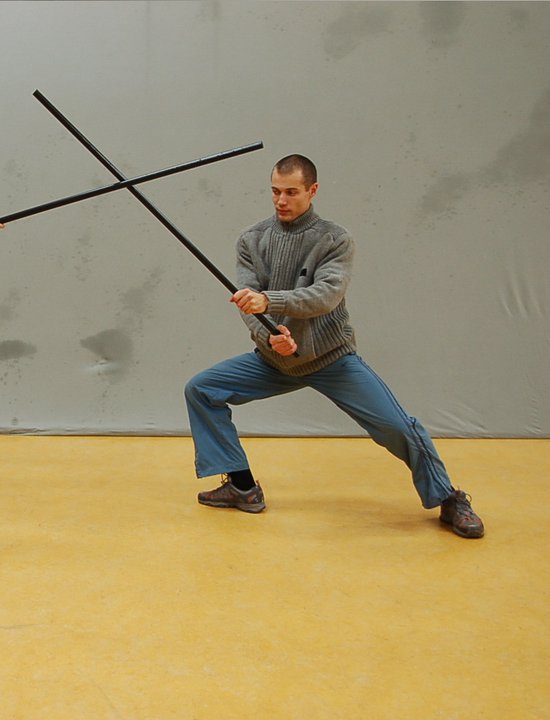 A little more than a week ago, Academie Duello hosted its very first Jogo do Pau intensive course with Luis Preto (originally from Portugal, currently from Slovenia.) This course delivered 25 hours of content over 5 days with an optional Assistant Instructor Certification add-on which added approximately 5 more hours of class focused on coaching and training methodology.

For those who are not familiar with it, Jogo do Pau (JdP) is a traditional martial art from Portugal that mostly employs the five foot staff held in two hands. The staves are usually made from lotus wood, but other strong and flexible woods like yew are also used. The art appears to have developed out of earlier two-handed sword material, though whether there is an unbroken connection to its ancestor arts or the art developed from a revival movement is unclear.

Luis and I have been talking about the idea of delivering a JdP certification program for at least a year, so it was excellent to finally have this first course come together. I feel that JdP and Luis’ approach are an excellent transport for fundamental weapon sparring principles as well as teaching and training methodology. I was not let down.

Luis has a very well thought out and building style of delivery that I appreciate. Each day’s warm-ups were done weapon-in-hand and prepared students for the types of motor skills they would need for lessons that day. Luis would teach a new technique, establish a motor skill base, and then put that technique into a simple combative context. He would then teach a second technique and integrate the two together tactically so that students were practicing their ability to recall multiple actions while simultaneously building tactical decision-making skills.

A compelling aspect of JdP as a European weapon art is that it has had a period of about 50 years to be tested and mature within its modern context. Luis was able to guide us on a journey from the traditional multi-opponent martial art into its more modern sport-dueling form, and then through its most recent developments with one set of techniques and tactics supplanting another through refinement and innovation.

This left much food for thought regarding the modern development of European sword arts.

If you are a sword art practitioner is there worth in taking a future course from Luis in JdP? Absolutely. Sure, the nature of the weapon necessarily alters the techniques of interaction. Wood certainly rebounds and interacts differently than steel, and the absence of a crossbar removes all forms of collecting parry. But the strength of the system lies in three universal aspects that will help all martial arts practitioners:

1. Body Mechanics. The 5 foot staff is both a rotational striking and thrusting weapon, the two fundamental movements of many European weapons. Luis’ approach was superb for teaching universal principles of power generation along with fluid and fast movement.

2. Distance Management. Whether you’re fighting with sticks, knives, swords, or hand to hand, control of the space between you and your opponent is essential to combative success. Luis’ program does a beautiful job of building the motor skills, mechanics, and perception to control both defensive and offensive space.  I have met few people who are able to control distance as well or move as fluidly as this man, and he can communicate that ability to others.

3. Tactically Grounded Pedagogy. Whether you take the additional coaching course or not, there is much to learn in Luis’ approach about how to structure a training session, build drills for maximum retention, and to understand how to take new mental programming from class into an applied setting.

If you’re interested in a thorough breakdown of what was covered in the intensive course from day to the next, I recommend looking at Roland Cooper’s blog at Terminal City Duelist.

Many of our students have responded to Luis’ teaching with enthusiasm, purchasing staffs to practice their JdP skills in his absence. His presence here was much appreciated.

As for myself, I wish to thank Luis personally for visiting Academie Duello, and I hope he comes back again soon.