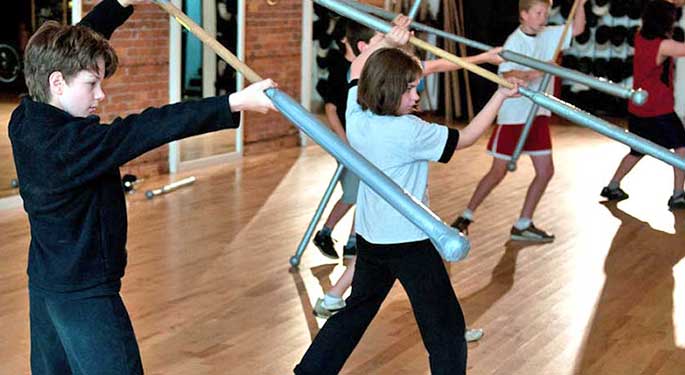 Congratulations to everyone who examined in our November 28th rank examination at Academie Duello. This was a very special event as it not only had examinees within the Mastery program (our core adult martial arts program), but also had two members of our Youth Program who were the first ever to test for the Blue Cord. Four members of our Bartitsu program were also the second group ever to test for the Blue Sash.

Owen and Emet, our two youth members, are worthy of much praise for their exemplary showing of skill across 5 disciplines: abrazare (wrestling), longsword, sidesword, staff, and rapier. These two have worked hard and showed crispness of form both in the demonstration portion and in the combat examinations. I’ve included a video of the two of them going through the progression of Marozzo’s sidesword guards which we were all very proud of. Roland Cooper and Kimberleigh Roseblade also deserve praise for excellent work as their instructors.

Nick, Miguel, Kris, Marika, Jason, and Johann all worked hard to get ready for this examination. The blue cord in the mastery program requires demonstration of wrestling skills as well as skills at the rapier in cutting, countering cuts, control of the opponent’s weapon, and use of the offhand. The combat portion is also 20 minutes solid of sparring with a demanding requirement on proficient fundamentals. Jason and Marika will be testing again in March where I anticipate they will do well. Kris, Johann, Miguel, and Nick will be joining us in Intermediate classes next week. Kudos all on the work you put in to get to the test and perform as well as you did.

Johann (yes, the same guy tested for two different programs simultaneously), James, Selman, and Thomas all tested in an examination of the Victorian Martial Art, Bartitsu. The examination required demonstrations and combative assessment in Boxing, Savate, Jujitsu, and Cane. All performed marvelously. I was particularly inspired to see how far many of them have made it since first coming into the school and embarking on the path of close quarters combat. This is a fairly young program in our school as well, so it’s great to see David McCormick doing a great job of encouraging a new generation of Bartitsu practitioners.

Thank you to everyone who attended the examination to support and test their peers. Thank you as well to the superb instructor team for all of your hard work!