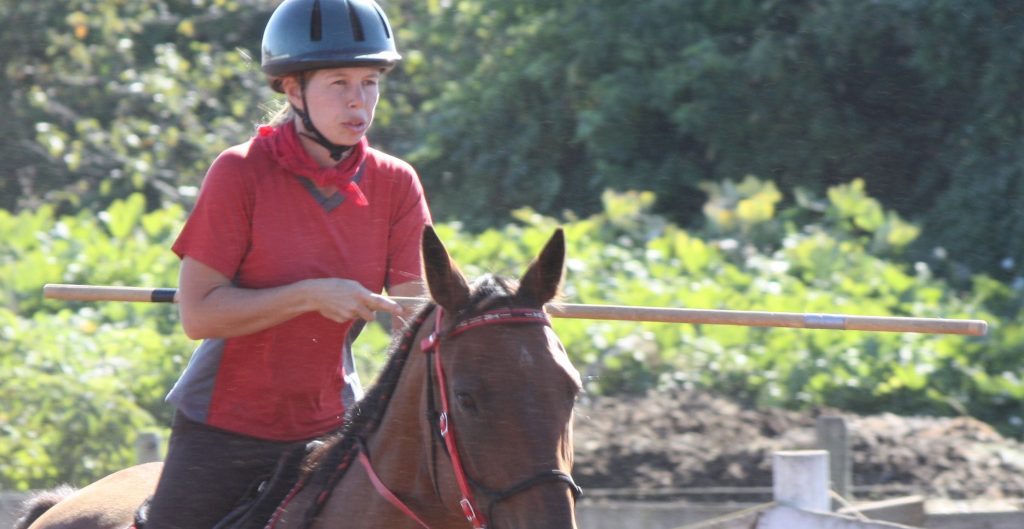 At the Blue Spur you are not expected to do actual combat with the spear, or even joust against the quintain.  However, we do want you to be able to:

Demonstrate couching and releasing of the lance.

‘Couching’ refers to holding the spear in one hand and tucking it under your arm for support.  In this way your elbow and side act as the base hand, giving you greater tip control, and more striking strength.  All we want to see in this regard is that you are comfortable holding the lance and moving the tip back and forth over the horse’s head.

You will find the most comfortable place to keep the base of the spear is not at the armpit, but rather about a handspan lower, closer to the waist.  Practise moving from posta di donna, with the spear tip up against either shoulder, and coming quickly down into vera croce with the spear couched across your horse’s neck, or into a presented guard on the same side as your spear arm.

When you are on the back of an animal travelling anywhere up to thirty miles an hour, it’s as important to know how to let go of the lance as it is to hold on to it.  Bracing your lance against your body with a tight grip allows you to strike with all the force of the horse’s forward movement.  However, if your lance becomes stuck in the target (whether it be a quintain or an opponent) or deflected to either side, you are now at risk of being dragged off your horse by your own spear.  Therefore it is important to be able to release the lance immediately after the impact in such a way that it poses no hazard to you or your horse.

If you are striking a target on the same side of the horse as your lance arm, simply roll your hand up and outward away from your body.  If your spear is relatively light and it comes free of the target at this point you can recover it to one of your guard positions.  However, if it is stuck, let go when your arm is fully extended to the side.  This helps make sure the lance falls parallel to your horse’s body, as far away from you as possible.

If the strike is across your saddle, push your hand forward and let it follow across your body as you release on the other side.

Practise releasing and simply dropping the spear to the ground before adding strikes to a target into the mix.  The goal is to train the muscle memory of releasing the spear first.  Once you can reliably drop it on either side of your horse without it hitting either of you, you can add targets of increasing resistance.  This will teach you to feel the angle and force at which you should hold firm, and when to let go.

When you’re new at this you’re particularly prone to hitting your horse in the rump with the base of the spear.  Make sure you sack your horse out thoroughly beforehand, and get him used to the brushing of the spear near his hindquarters.  And practise with a friend present in the case of unintentional dismounts!