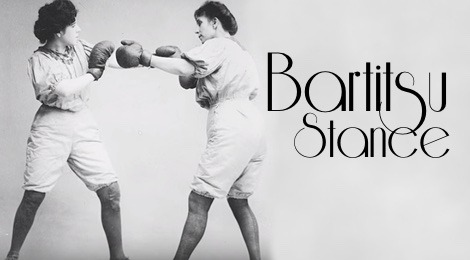 In many old boxing books, they claim that the first question students ask is “How shall I stand?” but I’ve never had a student ask such a question. However, it is the first question to ask yourself when you think a fight is about to start — whether you have just stepped into a competitive arena, or have been accosted on the street.

A good stance is an effective preparation to every movement you’ll need to perform next. Let’s take a look at the principles behind a good stance.

Jack Slack of “Fightland” examines the most basic but under-appreciated element of the fight game: the offensively and defensively imperative stance.

Jack Slack's Ringcraft: The Art Of The Stance

In slightly less detail than the boxing and MMA instruction above, here’s the traditional jujitsu stance:

What Is the First Basic Fighting Stance in Jiu-Jitsu?

It’s readily apparent that these two stances are very similar, and Bartitsu merges them. Generally, open hands are preferred in a self-defence situation to deescalate rather than invite a fight. However, when you’re at boxing range, closed fists will deliver harder punches.

While we’re on the topic, here’s a film reel from 1912 on traditional jujitsu:

A Note About Holiday Hours

Give the gift of Umbrella Self-Defence!

Do you have someone special in your life that you’d like to spar with… using an umbrella? Or maybe you just want them to be able to defend themselves using an everyday object as a weapon? Umbrella self-defence workshops are currently scheduled for January 31st and March 13th. Visit Academie Duello’s front desk during store hours to purchase a gift certificate redeemable for registration in one of our regularly-priced workshops.