There's something a little bit artificial about New Years resolutions.  Why pick January 1st to start changing your ways, and not any other random day of the year?  Granted, we may have a few extra pounds to shed after two weeks of rich food and reduced exercise, but you're probably going to get back on track after the holidays, resolutions notwithstanding.  Statistics show most New Years resolutions peter out before January does.  So instead of making resolutions this year, get out your calendar and start planning instead. 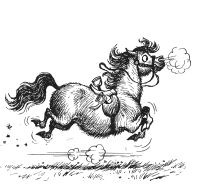 For equestrians, the dark months of winter are an ideal time to dream, set goals, and plot our courses.  Most of us who are still riding are in maintenance mode: a successful ride is one in which you're not soaked to the skin, your fingers and toes come back unfrozen, and your woolly mammoth of a mount is too out of shape to buck hard when the nippy air and lack of turn-out makes him extra prone to silliness.  But just because your noble steed looks more like a Thelwell pony than a destrier, and you feel more like a Goretex-swaddled duck than a rider, doesn't mean you can't map out your year.

Do you want to compete in shows, attain your rider levels, learn to jump, improve your seat, fight in a tournament, get your horse into self-carriage?  Whether your goals are large or small, and can be completed in a month or ten years, make sure you identify and acknowledge them.

If your goal involves competitions mark your calendar now.  Even if schedules of events haven't been posted, most shows occur around the same time every year.  Carosella 2016 is scheduled for the second weekend in September as usual.

If your goal doesn't have a fixed end time, create one. Make sure it's reasonable.  If you have a five-year-old green horse, teaching her to piaffe by the end of the year isn't reasonable.  However, teaching her to lengthen and shorten her stride is an excellent interim goal, leading to her learning the piaffe when she's older.

Most goals have interim steps.  In order to compete in the Green Spur Tournament in September, you will need your Green Spur. To get your Green Spur you will need to pass your Mounted Combat Skills assessment, your Riding Level 1, and your Horsemanship Level 1.  To achieve those you will probably need to register for Riding, Horsemanship, or Mounted Combat classes.  Figure out the interim steps to reaching your goal, and set interim timelines.  If that is too daunting, simply target the first step.  Once you get there, you'll find it easier to aim for the rest.  Don't think of dependencies as roadblocks, but instead view them as stepping stones or checklists.  Each one you reach brings you a step closer to your goal.

Even if that step is just outlining your goals or writing your target event in the calendar, once you've taken it you have covered part of the distance.  If your goal is to jump 3' by summer, sign up for a clinic, or discuss a lesson schedule with your coach.  Every step, no matter how small, is a percentage of the journey.

While your goal is important, most of the fun is in getting there.  Don't become so focussed on an end result that you miss the scenery along the way.  After all, you do this for fun, right?  And while you're working toward your goal, you're doing it with horses ... and swords, and bows, and spears.  How cool is that?