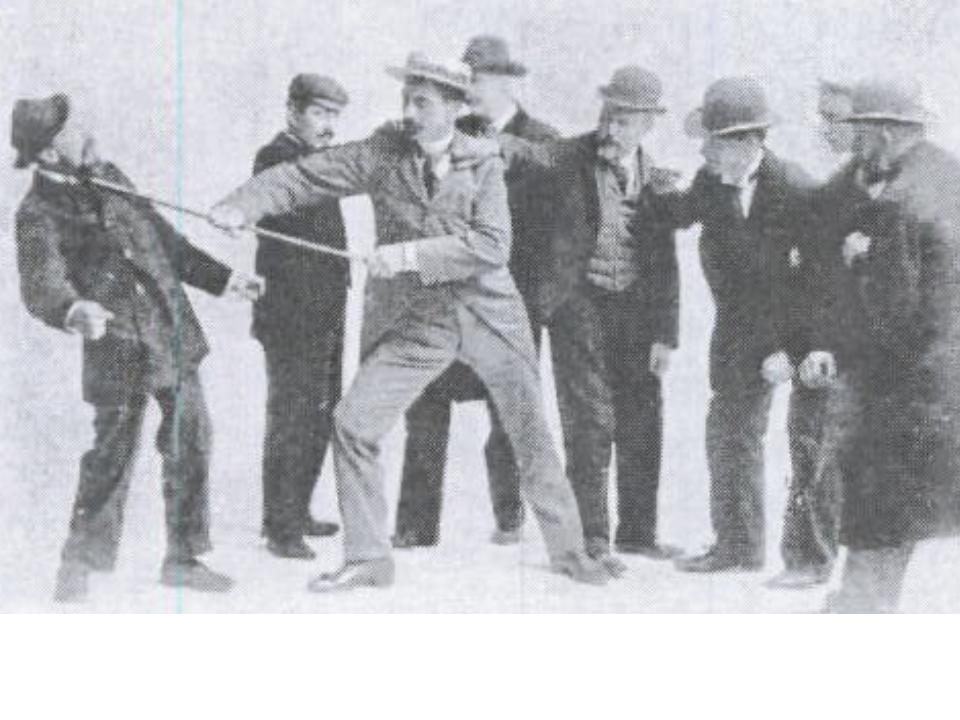 What do you do if caught in a tightly packed group of people, some of whom become violent? You may watch the news and see a group of people gathered in a festival who are attacked from the outside, such as the tragedy in Nice on Bastille Day. You may be a peaceful protester who simply wants to demonstrate by singing songs or standing in solidarity with a union on strike, or at a political rally. Sometimes those groups have members who start behaving badly, while others are cornered by security forces and violence erupts when accidents happen.

Self-defense is often concerned with a single attacker in a robbery/assault/rape scenario, then progresses to multiple attackers in similar circumstances. The same tactics and concerns are relevant when considering other contexts such as dealing with intimate partner violence or acting as a security officer removing someone from a room. However, many of our techniques go out the window in the chaos of bodies running in multiple directions, not knowing where the threat is, or being packed tightly among dozens of people. Here are a few other examples of what I would term a “riot”:

If being in a riot sounds dangerous to you as it does to me, let’s strategize a little bit rather than be surprised in the event that it happens.

You Should Have Stayed Home

A close friend of mine, Tommy Taylor, was living in Toronto during the G20 summit in 2010. The police were on alert for potentially dangerous protesters, and were searching everyone’s bags who entered various parks around the downtown core where it was thought protesters would gather. It was a hot day and Tommy decided to go for a walk and maybe look at the protests from the sidelines. I want you to read his full account, and bear in mind that Toronto, Canada is where this happened.

He created a play and toured Canada with it. It was called “You Should Have Stayed Home”. You can read his full account here: https://www.facebook.com/notes/tommy-taylor/how-i-got-arrested-and-abused-at-g20-in-toronto-canada/397205503638/

In short, the police barricaded one end of the street, and told everyone to disperse. However, there was nowhere to go because the police were also shutting off all other avenues of escape. Although freedom of speech and assembly are constitutional rights in Canada, Tommy wasn’t even protesting. Even so, he was put into a police van, driven to a detention centre which was a warehouse full of cages, and kept for 23 hours, the time limit that police can hold anyone without pressing charges.

I have two reasons for mentioning this incident. First, it’s important to realize that you can be caught in a crowd and have that become a dangerous situation without meaning to. The second reason is that although it offends our sense of justice, freedom and democracy, Tommy would have avoided imprisonment if he had stayed home. The title of his play comes from the advice given to him by a police officer when he was released.

In Bartitsu, our first tactic is Avoidance, so not getting close to dangerous situations like crowds and police in riot gear is good advice for not getting hurt. If you value your freedom of expression over your personal safety, you have to understand that you are potentially making that trade.

Recently, I saw a video of perfectly choreographed riot control by Korean police:

I am mindful that police training is currently a hot topic for debate, and that we may have disagreements about how police goals and tactics should change in the future, but it is good to be aware of how police are currently trained to handle these situations. Here’s a good article about police riot control tactics: How Stuff Works Riot Control.

Bartitsu students from day one at Academie Duello learn that jujitsu is made to work when the opponent is very close to you. It usually works better the closer they are. When we move to strikes and kicks, we emphasize that there is an ideal spacing to your target so that you can extend your elbow or knee to deliver the strongest hit. However, when closer, we also learn about the chopper and the knee strike which are variants of strikes that are effective inside of that ideal range.

At the red sash level, we also learn about other methods of creating power at close range. In fact, it’s the same methods we’ve seen at lower levels, but executed with more coordination and a faster cascade from one muscle to the next. A lead punch becomes a forearm blast, a cross becomes an elbow strike.

These maneuvers are not only to supplement jujitsu at the shortest ranges, but also for creating space around you when surrounded in a crowd. Sometimes they feel like weaker cousins to your powerful punches and kicks, but practice them diligently to develop power enough to protect you in a riot.

Although the police baton is a common piece of riot gear, the Bartitsuka will fight with their umbrella using our methods. For those who are interested in some historical footage, here’s part 1 of a police training video from 1963.

If you look at the 1954 version online, you’ll see that it’s mainly based on fencing, which as we know is not the best strategy when there is no hand guard.

The best grip when surrounded, especially in close quarters, is the bayonet grip. In the Bartitsu Canon, it is the only technique used against multiple attackers.

This webpage contains a list of crowd disasters compiled by Prof. Dr. G. Keith Still: Crowd Safety and Risk Analysis. As part of his analysis, he claims that “Virtually all crowd deaths are due to compressive asphyxia and not the ‘trampling’ reported by the news media.”

Even if trampling is not the primary cause of death and compressive asphyxia can happen when crushed when standing upright, it is still better to keep moving with the crowd, which would impossible if you fall. Going to your knees will cause others to fall over you, and you’d be on the bottom of a pile, which have been found to be up to 3m (10 feet) high in some disasters.

It turns out that our Five Strategies of Bartitsu are still useful in riot scenarios:

Remember that often your best plan is to have multiple plans so that you can flow with the crowd when necessary, and head for safety when appropriate. If trapped with hundreds of people, you may feel helpless, but remaining calm and making rational contingency plans will stabilize your anxiety and improve your chances.