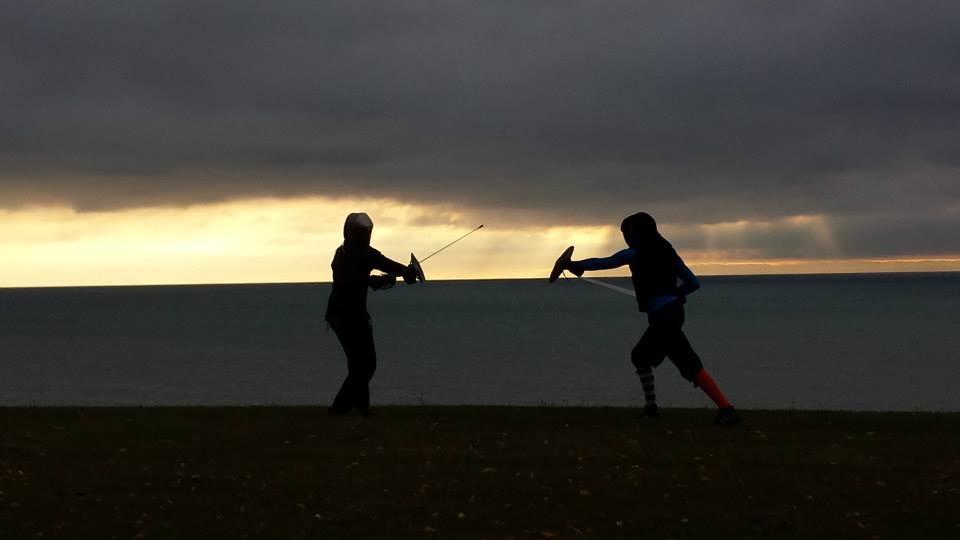 The Western Martial Arts Workshop (WMAW) for 2013 is over. Another satisfying year of this great event put on by the Chicago Swordplay Guild at the Dekoven Center in Racine Wisconsin. For those who are unfamiliar with the WMAW, this event started in 2001 and is one of the oldest workshops of Western Martial Arts in our modern times (if not THE oldest). The event is a gathering of instructors and practitioners from around the world and typically has between 20 and 30 top quality instructors in attendance who deliver workshops and lectures on a variety of topics over the course of a four day weekend. This year, in addition to teaching, I personally attended workshops and lectures from Roger Norling of the Gothenburg Historical Fencing School in Sweden, Mark Lancaster of The Exiles in England, Roberto Laura from Stuttgart Germany, Roland Warzecha of Dimicator in Hamburg Germany, Jake Norwood of Maryland Kunst des Fechtens in the United States and Greg Mele from the event’s very own Chicago Swordplay Guild.

As always the quality of the instruction was superb and I gained many insights on my own studies and exposure to arts and disciplines that I only read about and rarely have the opportunity to explore myself. The event is also a great opportunity to spar with practitioners from various backgrounds and with every weapon that you can imagine. I did my share of rapier, sword and buckler, sidesword, and armoured combat this year though an unfortunate shoulder injury in the armoured Deed of Arms on Friday put my body out of commission for the rest of the event (I managed to hobble through teaching my last few classes with some good assistance from Greg Mele, Roland Cooper, and Andre Kostur — thanks guys!)

The Dekoven Centre in Racine is right on Lake Michigan and is a beautiful 19th century, neo-gothic seminary school. The setting could not be more beautiful or appropriate for an event of this nature and it provides a beautiful backdrop for special affairs such as the Deed of Arms.

The “Deed” is a period style challenge at arms fought in full suits of armour and held with a certain amount of pomp and circumstance. This is my third time participating in the deed and I had the distinction of being part of the challenging companions (called the Tenans). The Venans (the side meeting the challenge) then face us in bouts that are fought for 3 minute lengths or until 5 good blows or a successful throw. Weapons include the spear, dagger, sword, and poleaxe. It is a rather impressive affair and can be fairly hard hitting, as I’m sure you’ve noted from my own injury. However the proceedings are certainly fought with honour and exhibition at heart so accidents are rare and the action is superb. This year a notable part of the proceedings was the Birthday Bouts of Robert Charette. Bob is celebrating his 60th year and is a fierce and knowledgeable armoured fighter. To help him celebrate his long life of swordplay he asked that his friends face him in 60 minutes of bouting at armour that were interspersed throughout the larger deed. He fought with great distinction — honestly he really kicked butt. It was great to see; I want to be like Bob when I grow up.

Another interesting event from this year’s WMAW was the “Duels at Dawn”. The idea behind this event (hosted by Ken Mondschein) was to educate participants about classical, late-period duelling through re-enacting such an event. 12 participants unfamiliar with epee fencing were given a 30 minute lesson on Thursday night in preparation for a duel to be held at dawn (6am) the next morning. –Many duels throughout history and in particular in this period were fought between people who had scant experience at the sword. One of the sources of a fencing masters business was last-minute duelling instruction.

Academie Duello’s own Aurelia Sedlmair was one of the participants so I got up early to cheer her on and also to act as second to my good friend Nicole Allen of the Chicago Swordplay Guild (also one of WMAW’s lead organizers) who was also participating. I have to say that 6am is rather early to be getting up at WMAW, where typically after a full day of workshops you stay up till 2am drinking with your friends. Nevertheless I managed to pull myself out of bed at 5:30am and it immediately felt well worth it as we strolled out in the emerging morning light, all silent and serious, while the church bells of the beautiful gothic grounds tolled our approach and the coming of the day. There in the green with barely enough light to see, 6 duels took place, each administered in a period fashion. Participants were encouraged to treat the duels as being both serious and deadly, and largely they seemed to take this to heart as many of the affairs were rather protracted (we know that some historic duels took the balance of an entire day to conclude — which is part of the reason they started so early). It was a great thing to watch and seemed to give some real food for thought to those who participated and observed.

Shortly following the Duels at Dawn my good friend Roland Warzecha and I headed down to the shores of Lake Michigan to have some of our own dawn duels. There in the early light we fought with sword and buckler for about 30 minutes for some of the most exhilarating fights of the weekend. Dakao Dao caught some great photographs of the whole affair one of which is the image for this post.

Saturday night provided me with another great highlight of my weekend: the Great Feast and it’s exhibition bouts. The feast is exactly as it sounds — a beautiful affair in formal attire with great food in the beautiful setting of Dekoven’s Great Hall. There the highlight of the evening is a series of bouts fought by instructors and senior students with a great diversity of weapons and styles. This year’s bouts included bowie knife, sword and buckler, messer, rapier and dagger, and armoured longsword. I have to say that some of these bouts were the best that I’ve seen at an exhibition of this nature. I’ve included a video of Roland and Jake Norwood in action at messer and arming sword wearing only mensur masks. I had been invited to be a part of this year’s bouts but my shoulder injury left me very frustratingly on the sidelines. However the quality of everything displayed was truly inspiring. Well done everyone!

Throughout the weekend there was a tournament going on that was dubbed the “Stealth Tournament”. The way this tournament worked was that anyone at the event could challenge anyone else in any of three categories: Thrusting weapons, single handed cutting weapons, two-handed cutting weapons. You would fight your challenge wherever you chose and then report to a recorder who would keep track of your score based on “First Blood” (the fighter who scored the first hit) and the first to achieve 5 total hits. Points were also subtracted for double hits. By lunch time on Saturday the totals in each category were tallied and at the feast the finalists were announced. They were in thrusting: Kathleen and Dan, in Single Handed: Bill Grandy and his student Doug, and in Longsword Mishael Lopes Cardozo and our very won Roland Cooper.

The finals of each event were very clean and enjoyable but of course the one I want to share most is the one involving Roland. Lopes (as his opponent is generally known) is a veteran of longsword tournaments and quite a fearsome sight with a shaved head and forked red beard. He is a very accomplished longsword fighter and it was great to see Roland in the finals with him. Lopes won the matches but Roland did a superb job of keeping him on his toes and comported himself very well with a few very close engagements. Well done Roland and congratulations Lopes!

Thank you to everyone who was a part of making this event such a great affair and congratulations to Nicole, Greg, John, Jacques and everyone else who put it on. Bravissimo!

I’m already looking forward to the next WMAW in 2015 — AND I’m also excited for the 2014 event held at the same time and place, this year featuring martial arts of the Mediterranean Renaissance. I will be there teaching Italian rapier and Bolognese sidesword alongside friends and colleagues including Tim Rivera, Puck Curtis, John O’Meara and many more. This stands to be a great event that I recommend everyone seriously consider attending — pre-registration is already open!

For a little more of the story of this year’s event, take a look at this photo gallery of images from the Duels, workshops, and deed of arms.