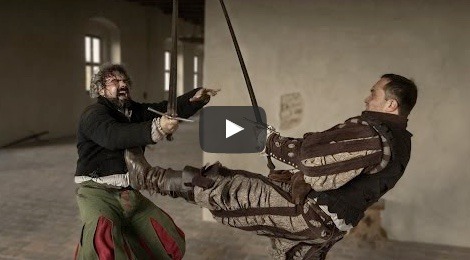 I am a big fan of Adorea Olomouc, a stage combat troupe from the Czech Republic. I’ve shown their YouTube videos to Academie Duello’s Demo Team for both stage combat training goals and filming sword fighting. I have to apologize to my regular stage combat students that I didn’t direct you to them sooner.

What you’ll notice right away is that their performances are in full historical costume and locations. Knowing that they want to appeal to an international audience, they do not use any dialogue, even for a scene from Hamlet. You may not know the reason for the duel, but you understand where each character wants to go, and how they use different tactics to get there. I love fight scenes without dialogue because they are such a challenge, and these guys perform superbly. Part of that is the camera work and editing to tell the story, so I don’t want to miss praising their filmmaking skills.

And of course, I cannot heap enough praise on their fight technique. Not only are they using appropriate postures and historical techniques from known fight books, they do so without ever looking like a demonstration of perfect form. Instead, the dynamic nature of a fight happens to use proper technique. In other words, they convey intention and intensity, and are so comfortable with the stances and use of their weapons that they can interact at full speed without breaking character.

Here is their most recent video, a longsword duel:

You can see all of their videos on their website: http://www.adoreaolomouc.cz/. It’s in Czech, but Google Translate will give you the gist. The site has great photos and a modern layout.

The first step towards professional performance like this is to get a Basic Certification in our Fight Directors Canada course which starts in January. Learn the secrets of expert sword fighting for film and stage, all the while remaining safe in rehearsal after rehearsal.