Ever since I was a kid Halloween has always been my favourite holiday of the year.  My mother would spend months sewing exceptionally detailed and original costumes for me and my brother, and I loved heading out into the streets of my neighbourhood to see what all the other families had decked themselves out in.  Afterward, me and my sibling would ration out our candy to pack into our school lunches for the weeks to come so that our stash would often last us until December.  As I grew older the magic of Halloween never waned, but only grew and changed within me.  I’m still excited about Halloween and I love getting dressed up in costume, heading out and joining in festivities with other people unabashedly allowing themselves to get dressed up in whatever ghoulish — or ridiculous — getups they can put together.

Though Halloween is one of North America’s biggest money makers (second only to Christmas) the roots of this holiday go back across the Atlantic to where many of our ancestors immigrated from.  Grab yourself some spiced apple cider and join me as I dig into the rich history behind this beloved holiday.

FROM ANCIENT CELTS TO THE ROMAN EMPIRE, AND THE CHRISTIAN CHURCH

Samhain is a Celtic Gaelic festival which marks the end of the harvest season and the transition from the light half of the year into dark half of the year.  Samhain was celebrated from the sunset of October 31st until the sunset of November 1st.  This was a time when farmers would bring their cattle down from their Summer pastures and slaughter the livestock that would feed their families through the Winter.  It was also believed that on Samhain, the veils between our world and the spirit world were at their thinnest. Spirits had been kept down in the earth, blocked by the crops, flowers and vegetation of the warmer months, but as crops were harvested, flowers wilted, leaves fell from the trees and the grass turned from green to brown, this allowed the spirits to rise and wander.  This was also a time when it was believed that the souls of the dead, faerie folk, demons, and various otherworldly pagan gods and goddess would come into our world.

Around 2000 years ago, most of the Celtic and Gaelic lands had been conquered — or greatly influenced by — the Roman Empire.  The Romans had two of their own pagan harvest festivals around that time of the year: Feralia, which commemorated the passing of the dead, and the festival of Pomona, the Roman goddess of fruit and trees.  One of the symbols of Pomona was the apple, which is likely where the tradition of bobbing for apples comes from.  The Celts and the Romans combined their festivals together until the influence of the Christian Church. 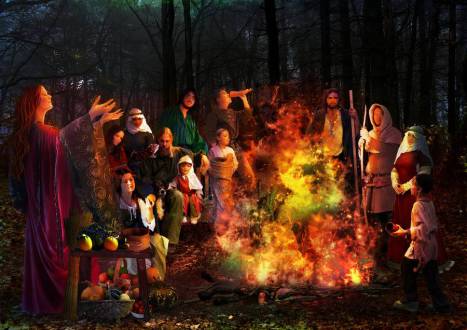 An artist’s interpretation of what a medieval Samhain or All Saints festival might have looked like with Celtic, Roman and Christian influences.

By the 9th Century C.E Christianity had swept across most of Europe as the prominent religion.  Part of what made the spread of Christianity so easy was that the church adapted many of the old traditions and pagan holidays of Europe into their own church-sanctioned holidays.  November 2nd became All-Souls’ (or All-Saints’) Day to honour the dead.  Like the Celtic and Roman festivals before it, All Saints’ Day was celebrated with bonfires, parades, games and dressing up in costumes — not unlike what we do in the 21st century on Halloween.

On October 31st when spirits were believed to roam the earth, Gaelic people would wear masks and costumes when they left the house to try and confuse the spirits into thinking they were one of their own and (hopefully) leave them alone. They would also leave food and alcohol on their doorsteps to appease the spirits and keep them from entering their homes.  However, some families welcomed the opportunity to have the souls of beloved dead relatives return for the evening and would set up a place at the dinner table with food and wine for their dearly departed.

The day after Samhain, the less fortunate people from the community would go door to door begging for sweet breads known as soul cakes.  They would do this in exchange for praying for the souls of dead relatives and loved ones from the families who would give them these cakes.  This was known as going souling.

In other places in Europe people would dress up in costumes and receive food, wine, or money in return for reciting poetry, performing music, or telling jokes and riddles.  This is why to this day you’ll still see Morris dancer and Mummers performing at Halloween parades and festivals.  During the All Saints’ festivals held by the church, people would dress up as the patron saints, angels and devils and parade around the church yards.

Halloween costumes in the early 20th century were a different kind of spooky!

During the early days of colonial New England, many of these traditions went unpracticed due to the very rigid puritan beliefs of the time.  However, as various European and Celtic cultures mingled and mixed within the Americas, Autumn festivals began to emerge in the colonies. People would come together and share stories of the dead, tell one another’s fortunes, dance, sing, light fires, and young women would play divination games with apples in hopes of getting a glimpse of who they would hopefully marry.

In the nineteenth and twentieth centuries, North America saw a huge wave of new Celtic immigrants — particularly the large flush of Irish immigrants fleeing the Great Hunger in 1846 — who brought with them the traditions and folklore of their homelands.  This is where we begin to see hints of what would grow into the modern holiday of Halloween. Taking from these traditions, American children would put on masks, dress in costumed disguises and go door-to-door and ask for food or money.  If a home refused to give either of these things, the masked and costumed characters would often play a trick or prank upon the household which is where kids these days got the saying “trick-or-treat” from.

The original jack o’ lanterns were not carved from pumpkins as we see adorning porches and doorsteps this day and age, but from turnips, beats and even potatoes.   In the 1800s when many immigrants of Celtic origin came to the shores of America, they brought this tradition with them.  It was here in North America where the pumpkin was became the popular gourd of choice as it was a plentiful and popular crop which was very easy to cut out and sculpt.

So, why do we call them Jack O’ Lanterns?  There is a legend of a man named Stingy Jack who managed to trick the devil — not once — but twice.  Jack was also able to strike a deal with the devil (through trickery — what else?!) where it was agreed that upon Jack’s death the devil would not claim his soul.  However, upon Jack’s death, God didn’t want his soul either (since Jack lead far from an honest life) and so he was doomed to walk in eternal night with a burning coal inside a carved-out turnip to light his way as he roamed through purgatory.  The Irish referred to this ghostly figure as “Jack of the Lantern,” which over time became “Jack O’Lantern.”  This is why people in Ireland and Scotland began to make their own versions of Jack’s lantern by carving grotesque faces into turnips, beets, and potatoes.  They would place them by their homes to frighten away Stingy Jack and other unwanted wandering evil spirits and travellers.

So, as you sit at your sewing machine frantically piecing together your costume, kneel on your front lawn and place a candle inside of your newly-carved pumpkin, or sort through hundreds of tiny candies to give out to kids in your neighbourhood, remember where some of these modern traditions originated from.  And, of course, have a happy and safe Halloween from all of us at Academie Duello!