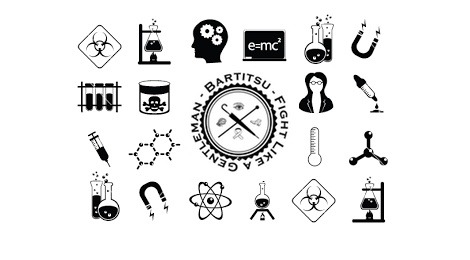 Bartitsu is a historical practice, but it is stimulating to study because it is a scientific approach to self-defence from an age of Western science. I don’t seek to impose a scientific analysis on top of an ancient tradition, because Bartitsu was founded on the two pillars of sound engineering:

The first example of established science is Basic Mechanics from physics. These are Newton’s Three Laws:

We can see the first and second laws in our boxing, where we’d prefer to slip to the side of a strong punch rather than apply a sufficient force against a mass that is already in motion to move or stop it. We use the Third Law when we punch with an extended elbow in a straight line or perform a shin kick with a straight knee at the point of impact. We understand that the harder we hit, the more force we feel as a reaction through our own body, and that force will move in a straight line from the vector of impact.

The second physical principle that pervades Bartitsu is leverage, or what is called mechanical advantage. It is employed by what physicists call “simple machines” like levers and ramps, but sometimes those machines are composed of our own long forearm bones or the ramp created by your leg at an angle to the floor. I wrote about this in two posts on the basics of Bartitsu here: Jujitsu in Bartitsu and Mind in Bartitsu.

Our third major physics application is used mainly in our walking stick self defence: Angular Momentum. Essentially, this is an application of Newton’s Second Law applied to rotating bodies, such as the cane that rotates in the hand to deliver a downward strike. Although the understanding of all forms of torque, which is a rotational force, can enhance your understanding of throws in jujitsu and some kicks in savate, the most important thing to remember is that angular momentum is preserved in a plane. In other words, if you think of the rotation of a wheel on an axle, not only do you apply force (torque) to change how fast the wheel moves, but also to turn that wheel. When you strike with a stick, you can apply more force if your stick doesn’t change its axis of rotation.

Physics is very important to Bartitsu, but the study of anatomy is also crucial to the development of strikes and takedowns. A punch to the shoulder blade, no matter how powerful, will not ever be as effective as one delivered to the throat. Some targets are obvious when we take extreme examples like that. However, one of the biggest obstacles when students feel more comfortable and move faster is their targets become imprecise. A punch may employ good physics, but punching into the sternum does not acknowledge the anatomical strengths of the opponent. I see many stick fights in which hits are made to the upper thigh or hip. The correct target is the knee because it is vulnerable to lateral hits, whereas the thigh and hip are not.

Although we’ll get to psychology below, neuroscience is a part of biology. When we discuss knockouts and concussions, we’re not only talking about hitting the head hard, but also the most effective angles to cause a concussion, and things you can do to prevent concussion.

I believe one of the unique aspects of Bartitsu is its employment of psychology to self-defence. Although modern self-defense courses teach awareness and surprise, the use of aggression to your advantage and other psychological principles, it was virtually unspoken in classical martial arts or sports of the era in which Bartitsu arose. However, Barton-Wright included the effects of disrupting the assailant’s expectations and attacking in a manner to predict their reaction (e.g. the preemptive attack) very early in the canonical Bartitsu articles.

Another social aspect hidden in Bartitsu is the pedagogy, or the methods of effectively teaching the techniques and remembering them. Barton-Wright did not retain the Japanese terminology from jujitsu, nor the French terms from savate, but made it easy for the English gentleman to absorb and practice the effective movements.

Science is sometimes thought of as a body of knowledge that is taught in a science class, or as the thing that scientists do. In fact, the scientific method is a simple procedure that anyone can use to investigate any feature of the universe. It is usually framed in four steps:

Different sciences use the scientific method in different ways. Geology studies ancient rocks, so its experiments don’t require a time machine, but evidence from chemistry, comparisons to other rocks, and sometimes converging evidence from fossils embedded in the rocks that relies on biology’s methods for determining how old a creature’s bones are. Both Pierre Vigny and E-W Barton-Wright went into dangerous alleys to test their theories against toughs. In our club, we try our methods in sparring and with different partners who may be resisting or outright fighting our attempts.
When an attempt fails, we must ask ourselves: Did I fail in my application of a sound technique, or is this technique not sound? You will only figure out the answer through the scientific method.

Science is also concerned with parsimony or the simplest answer that satisfies the question. Your method of defending against a punch may be effective and beautiful, but if it requires 20 steps, or if it only works against an assailant wearing a vest, then your method is not simple enough to pass for science. However, if your only answer is to cover your head with both hands, then it may be too simple to fully address the problem.

In the end, common sense is a great tool, but a better understanding of both scientific principles of physics and psychology and an application of the scientific method will enhance your performance of Bartitsu. Take your time, take notes, and take a step back to observe and understand where forces are interacting when you must fight. Being strong and repeating your lessons until perfect is only part of the challenge. The rest is mental work and science.