Even if you’re using fake blood in one scene, that does not obligate you to use it in another scene.

There are other considerations as well:

But even if you think the scene needs blood, and you’re comfortable with all those questions, have you considered all of the potential ways that a death scene might be even more theatrical and that may fit your style and themes? The choice to not use realistic blood does not need to take away from the effectiveness of the death.

Here’s an excellent article from the Guardian that mainly concerns a revival of Bugsy Malone, and also speaks about various on-stage death scenes without fake blood: https://www.theguardian.com/stage/theatreblog/2016/jun/27/fake-blood-dead-stage

So, besides fake blood, here’s a few categories that you might consider as a director or designer:

1. No Effect
Remember that the audience knows they’re in a theatre. Their willing suspension of disbelief is not shattered if they don’t see blood. In fact, some people have a built-in revulsion to the sight of blood, and may make them leave the theatre if your effect is too realistic. If your audience becomes too upset to continue watching, they’re missing the story because of a gut reaction, which would be a shame.

And remember that some deaths should be tragic, heroic or even comical. Blood can ruin such scenes.

2. Alternative Material
Red ribbon or exposure of a red undergarment can look almost as good as liquid, while being easy to clean up and remain within the world of the theatre. There are several examples in Shakespeare In Love (1998), and the recent Zootopia (2016) (although animated, they perform a little play at the start):

3. Symbolic
Have a creative brainstorming session about the themes of the play. Perhaps in King Lear, there’s a peal of thunder and a flash of lightning upon a death. That way, when the storm comes, it seems like the entire kingdom is dying.

It is sometimes harder to get away with symbolism in films than it is in theatre. But when you really examine death scenes in movies, you’ll find that only a minority will directly show the injury with a lot of blood.

Alfred Hitchcock is credited as starting the trend of showing blood on screen with Psycho (1960), but that doesn’t mean that every death scene must include blood effects. Even with today’s easy addition of digital blood effects, many directors choose to put the final corpse off-screen. Take a look at scenes in which a person takes a beating and the assailant is stomping down on their fallen body. In almost every case, we don’t need stage combat and we don’t need blood effects because either the camera takes the place of the victim, and we see the boots approaching us, or else it’s shot to show the upper bodies of the kickers and the victim is below the bottom of the frame. We don’t need to see the impacts or the blood to be horrified by the attack.

If you want to study when to show violence and when it’s more shocking to put it off-screen, watch the Coen Brothers’ films, especially No Country for Old Men (2007). There are a lot of murders, but almost no blood. We focus on the killer’s face, or look away to the lovely landscape instead of looking at the injury. 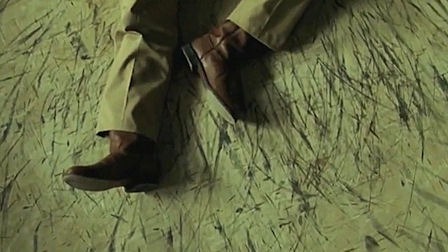 Even among horror movies, the original Halloween (1978) by John Carpenter and even the Texas Chainsaw Massacre (1974) have very little on-screen murder or blood. Both are terrifying.

Sometimes filmmakers avoid the blood effects to boost their sales. An R-rated film means that the producers lose a lot of revenue because teenagers who are avid moviegoers can’t legitimately view it. This is the case in most television series made for the major networks. You’ll see more blood on HBO and specialty channels because they don’t have the same restrictive regulations as other broadcasters. So having some creative solutions to the problem of blood effects may endear you to producers and critics alike.

I’m not saying that every death scene should avoid fake blood, and an abundance of blood may be appropriate for your film or play. Quentin Tarantino’s Kill Bill (2003) is especially famous for its sprays of blood. Halloween fare, including the theatre of Grand Guignol, should have plenty of blood and gore because the answer to our primary question is “yes, we want maximum horror.”

But if you’ve got a stealthy assassination, or a tragic mistake, or a character who should be a sympathetic figure, then perhaps you can find a way to replace the blood effect. Create the connection in the mind of the audience between a balloon and a person, then pop that balloon, and see how your audience feels about it. It might just be more powerful than you think.