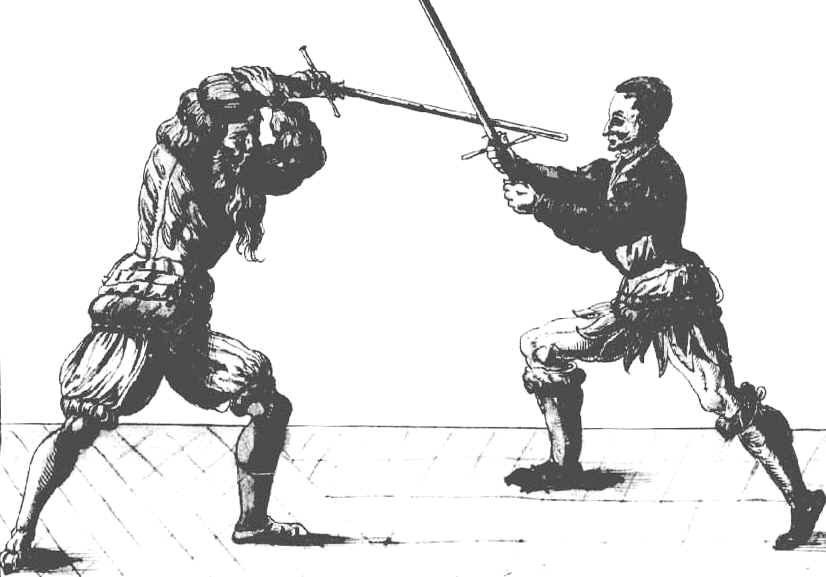 Swordplay from the Ground: turns of the sword

In the Green Spur checklist we ask you to demonstrate the three turns of the sword, ie, the volta stabile, the mezza volta and the tutta volta.  These are described in this post from last year, so first go back and familiarize yourself with the turns.

For the Blue Spur we want you to demonstrate the appropriate use of the turns in response to pressure from your opponent.  When your sword is met you have three turns available to counter-attack.  Which one you choose will depend on the the amount of pressure your opponent provides. 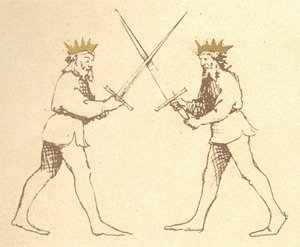 As an example, let’s suppose you begin by delivering a mandritto squalembrato, or a cut that comes from the right side of your body and targets your opponent’s left shoulder.  Your opponent parries your sword.  The turning you choose will be a response to the vigour of that parry.

Volta stabile: If your opponent’s sword meets yours, but doesn’t force it away the best response to this light pressure is often a volta stabile. Turning the true edge of your sword towards the opponent’s sword is enough to re-gain leverage and finish the attack with a thrust to her right shoulder.  (Note that a volta stabile can also be used to yield to greater pressure with the false edge into a punta dritta or punta roversa, but it’s not necessary to demonstrate those plays in this assessment).

Mezza volta:  When met with a slightly stronger parry, that aims to cover, but not necessarily drive through, your sword, the mezza volta is a good response.  In this case you would respond by making a half turn, allowing your sword to ‘bounce’ from one quarter to the next.  As your opponent parries your mandritto with medium intensity, you allow your blade to rebound over her sword to the upper right quadrant and strike towards her right shoulder.

Tutta volta: This is the response to a very strong parry which drives your blade away rather than simply causing it to rebound.  With the same starting attack as above, if your opponent drives your sword downwards, your response is to yield to the pressure with a strammazone, and allow the momentum to carry your sword in a 180 degree wheel back to her right shoulder.

Note that in all three cases your attack began towards her right shoulder, but finished in her left shoulder. With the mezza and tutta volte you moved your sword away from hers; with the volta stabile you moved it into the line of her sword, but in all cases you used a turn of your sword to attack into a different quadrant than your orignally aimed for.

These volte of the sword can be used in all quadrants: a rising cut aimed at the right leg can be parried low and strike into the right shoulder with a mezza volta; a weak crossing is always vulnerable to a turn to the true edge; and any time your sword is driven away by a strong parry a tutta volte will free it and bring it to the open side of your opponent.  Likewise, the defender as well as the attacker can use volte to defend against the counter-attack, and so on, until one player has found the winning line.

Turns of the sword also make excellent feints and deceptions, drawing the opponent to one line so you can attack on another.  The Blue Spur candidate is expected to be able to set up a variety of plays that make use of the volte.  A good excercise is to practice play-building with a partner, seeing how many attacks and counter-attacks you can build into the play using the three turns of the sword.

Swordplay in the Salle
Sunday 23 February 1 – 4pm
Academie Duello Centre for Swordplay, 412 W Hastings, Vancouver
cost: $60
Escape the winter weather and practise your mounted combat techniques from the ground and from the falsemount in this special indoor mounted combat session.

Intro to Mounted Combat Workshop
Sunday 6 April, 10am – 1pm
Red Colt Equestrian Farm Co-op, 12320 No 2 Road, Richmond
cost: $149
A taste of everything in the program.  Learn about grooming and tacking up, get some swordplay fundamentals, and ride a horse with sword in hand.
prerequisites: none