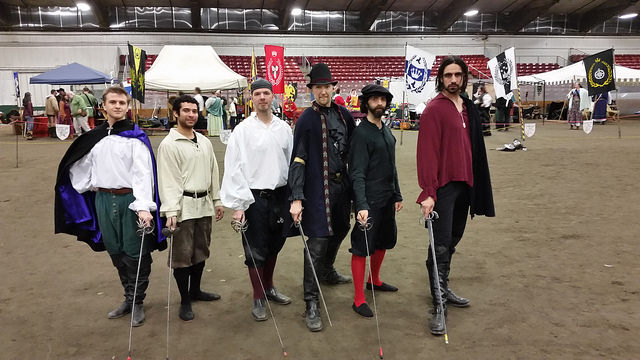 This past weekend a crew consisting of me and five senior students from Academie Duello headed down to the 2015 Ursulmas Championship tournament in Monroe, Washington. This is a tournament hosted by the Society for Creative Anachronism, an organization devoted to re-enactment of the middle ages and renaissance in various forms, including combat.

Though re-enactment is not the area of expertise of Academie Duello, the combat environment of the SCA is very familiar, at least with the rapier. The rule system is very similar to what we use at the school and is used within the broader WMA community. The equipment is also essentially the same, though they wear a bit more armour.

One of the real contrasts for first time Duello fencers at Ursulmas however, is the diversity of approaches to rapier play. Where our school has a particular system in which we fence, this environment is one that brings together fencers of all different backgrounds. Some have orthodox and systematic approaches, though different than our own, some have completely home-grown approaches. This is part of what makes the environment useful and exciting. Especially for a more experienced student of rapier who has a solid grounding in their fundamentals. The level of experience in competitive fighting is also quite high. Some people at the event had as much as 30 years of competitive rapier experience.

This is the fifth year that the Academie Duello has brought a team of students, though I have personally been attending this particular event for nearly 20 years. We participated in two tournaments and our results were very gratifying for me as the proud teacher.

This tournament had approximately 50 participants who were divided up into 4 pools. Each pool fought a round-robin (everyone, fights everyone else, once). Wins and losses were not tracked, however the fighting beauty, effectiveness, and comportment of each participant was judged throughout by external judges. These judges and selected participants were then polled for accolade votes, and the top voted fighter for the aforementioned qualities was selected from each pool. Those four then fought a single elimination semi-final and finals match.

Our very own Erik Hayden was selected from his pool to be one of the four, and went on to win the tournament! Erik fought beautifully throughout and that was no exception in his final matches. Congratulations Erik!

The big rapier event of the weekend is the Championship Tournament. This year there were 65 fighters, which is an excellent turn out. The level of competition was very high and the quality of the fencing and the people truly matched it. The format was an Open Field tournament, which invites all participants to issue open challenges against one another, fight them, and report the result. Over the course of two 40-minute blocks, participants try to get in as many matches as possible and to keep their percentage of wins over losses as high as possible, while meeting a bar for minimum number of matches.

The Academie Duello crew all had very respectable scores, with everyone in the top 20 for percentages (I believe, I’m working on getting final stats as this goes out). The top eight overall were pulled into the semi-finals and included me in the first spot, Matheus Olmedo in the fifth spot, and Matti Schneider in the eighth spot.

Matheus was eliminated in the first round.

Matti made it through his first round match, not without some troubles, but with a satisfying result.

I also had a challenging first round. Richarde is an excellent fencer, and a longtime friend of mine. I was honestly exhausted after the first two tournaments and it took me a while to marshal my focus.

Matti had an excellent match in the second round against Gracion — also an Italian fencer, and one with very respectable skills.

I defeated Verith in the second round, finding resolution for Matheus.

This left Matti and me in the finals, which was truly a pleasure as an instructor. Matti fought very well. I defeated him with a strike to the chest in the first of three; Matti made a very nice attack to my hand and then my chest to win our second fight; and I then struck him in the head as he attempted to strike my toe, in the third. In the video you can hear me comment on what I think about toe shots!

Everyone fought superbly well and great comments were received about all of our visitors. It was also a lot of fun.