This November, join Maestro Roberto Laura for a week-long training intensive, studying the traditional knife arts of rural Italy. Over the course of 30 hours, students will cover all the material required to achieve the rank of trainer (allenatore), which is recognized by the ASAMIR (Associazioni Sportive Arti Marziali Italiane Riunite) in Italy, as well as on international level.

Roberto Laura’s goal is to preserve and pass on the traditional popular Italian fencing systems with knife and stick (TIKF – Traditional Italian Knife Fighting), and to build up a circle of proficient instructors who are willing and able to keep the arts alive. Read more on his site, on Facebook, and check Roberto out on Youtube.

The TIKF also contains elements for close range actions that have their roots in Apulia, self defense methods from Genoa (Liguria) as well as the sheperd stick from Calatabiano, the so called “flowery school”, which is related to the circling school from Riposto.

TIKF covers both wide and close range, the knife as well as the stick, the duel and self defense (also with coats, kerchiefs etc.) – all parts of the traditional Italian fencing traditions.

To be recognized as trainer (allenatore) and to run a class it is necessary to have passed the basic “popular duelling knife” course. The candidate learns the traditional “form” (scuola) as well as the basic elements of the lessons (insegnamento) with the knife. The future trainer also has to know the traditional didactics of the system.

To be recognized as istruttore within the TIKF the candidate has to pass the courses “Close range fighting with the knife,” “The knife in conjunction with the coat and other items,” and a basic module “The traditional shepherd stick”.

To be recognized as maestro the candidate must be able to apply all of the forms and lessons at a high level while keeping up the specific elegance of the system. Further the candidate must know the history, the culture, and the conventions of our traditions as a whole, as well as each of the different traditions that make up the TIKF. 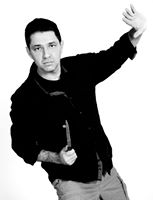 Maestro Roberto Laura was born in the beautiful San Remo at the Italian Riviera. In 1975 he moved to Heidelberg, Germany, were he lived till 1994. He currently lives with his family in Neckarsulm, close to Stuttgart.

After several experiences within the martial arts, in 2001 Roberto started training in the traditional Italian knife fencing systems with knife and stick. The systems taught by maestro Roberto Laura are mostly dueling and defense systems from Liguria, Apulia and Sicily, all probably from the 19th century. He was the first teaching them out of Italy.

Maestro Laura founded the TIKF – Traditional Italian Knife fighting. The TIKF is not a system itself, it is rather a “collecting tank” for the different traditional arts he practices, trains and teaches, as well as the AMICI-Group, a voluntary union of maestri, instructors and groups teaching the traditional Italian arts.

Further maestro Roberto Laura is the head of the ASAMIR-Germany, an international recognized association dedicated to the preservation of the Italian and – most of all – the Sicilian fighting traditions. 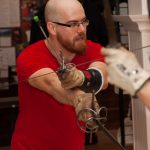