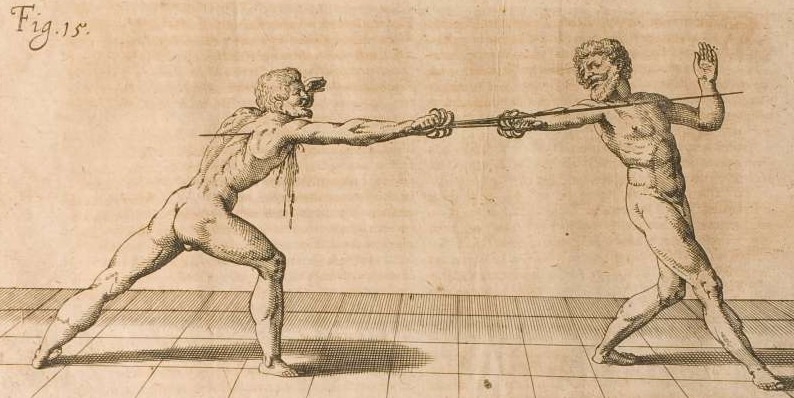 This morning Greg and I met at a print shop in Vancouver to go over the latest proofs of my Introduction to Italian Rapier book. A pre-print copy of it is going to be coming with me to the Western Martial Arts Workshop this coming weekend. It has been a labour of love to produce this work for an art for which I have had a love affair for the past 20 years.

Considering the number of things that I have taken up, loved, and then put away during this time, it’s quite remarkable that this discipline still holds my interest today.

Here are a few of the aspects that have captured me so:

The rapier is efficient and deadly

One of the first things that captured me was the directness and efficiency of this weapon. It’s a weapon that lends itself to getting through the tiniest of holes in an opponent’s defences. I often say to my students of techniques “do as much as necessary but as little as possible.” The rapier really rewards and demands the “little as possible” part of this. It can be an amazing thing in a good sparring match to have a string of move and counter-move weave through one another in an instant.

The rapier is exacting and precise

All this efficiency is hard! I think every art at its highest levels truly requires exacting precision but the rapier seems to expose that need really early. Once I got over feeling like I needed to be the best with this weapon in the first couple years of its use, I came to really enjoy how long the road is to being truly good with it. More than 20 years in and its still super palpable to me how much getting better I can yet do. Not in a way that’s frustrating but in a way that tells me there’s still lots of enjoyable studenting to get out of this weapon in the years to come.

The rapier makes for poetic conversation

I think every weapon has its own beautiful way of speaking in a sparring encounter. The rapier is one that is truly rich in feeling and nuance. And I mean “feeling” in a literal sense. The rapier emphasizes the binding of the weapons (your weapon crossing and touching that of your opponent) and there is so much richness in feeling your opponent’s pressure, responding subtly to it, deceiving, counter-deceiving, and then moving your body behind it in a sometimes serpentine fashion. Though I love the longsword, sidesword, polearm, and wrestling, each for their own unique qualities, there is something truly marvelous and breathtaking about a high level sparring match with the rapier in its weaving and winding nature.

I hope that through my book that I can open up a new generation of practitioners to the beauty, elegance, and power of this weapon. It is a weapon that has truly transformed me, as a martial artist, for the better in every discipline I practice. I hope it can do the same for you.

The book will be available through Freelance Academy Press and the Academie Duello and Duello.TV websites. I’ll let you all know when it’s available for order!