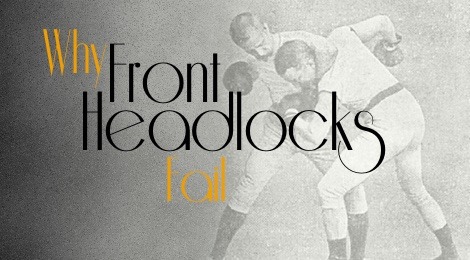 The front headlock is a very common position that occurs in many forms of wrestling. It is so instinctual that many children use it in play fighting without ever having seen it before. Although there are two directions for “chancery” in bare-knuckle boxing, the front headlock is by far the most common.

Despite the popularity, it seldom wins.

Today, we’ll look at the entry into the front headlock, its uses and follow-ups, but my main point is to avoid it because of the many counters and too few reliable finishes.

The position of the front headlock happens when two friends are facing the same direction and one of them puts their arm across the other’s shoulders, behind their neck. Pulling downward, the friend performing the headlock hugs the other’s head so it ends up beside their own set of ribs. This is done by placing a forearm below their partner’s chin so they can’t back away. If the hugging hand is joined by their other hand, they can get a tight grip, but it won’t block the windpipe or effectively constrict the blood flow to the brain, so there is no choking danger.

This position might happen as the first aggressive move: a surprise attack from behind. The victim is unaware of the attacker approaching from behind, who leaps for the neck and pulls downward as he lands. It is also a common option from the collar-and-elbow wrestling stance, using the lead hand to wrap around the neck. It is also a natural follow-up when attempting to hook-punch an opponent who gets close.

The only advantage the attacker gets from this position is the opportunity to throw a series of short punches to the victim’s face. The Bartitsuka who finds himself in this position knows to use his hands to shield himself, and should next focus on effective countermeasures.

The front headlock has many features that resemble a hip throw, but looks are deceiving. There is no effective takedown from this position that keeps the attacker standing.

It is important to draw the distinction between Bartitsu’s use of traditional jujitsu versus other wrestling systems: in Bartitsu we do not want to fall or wrestle on the ground. Remember that a street fight means hard surfaces, perhaps broken glass or other obstacles, and the possibility that your attacker has accomplices who can attack you whether you are winning or losing your ground game. We stay standing.

Wrestlers, judoka and other combat sports know that if you twist your body while applying the front headlock you can lean towards your opponent’s head and end up in side control on the floor, falling on top of your victim. It was one of my favourite positions when I competed in judo.

However, a Bartitsuka aims to complete the throw without himself falling. Wrenching the head around will only cause your opponent to shift their feet. Does the cross-buttock throw work from here? The answer is yes, if you decide to do it before their head is against your ribs. You need enough room to get your hips beneath theirs.

The cross-buttock throw (as illustrated) is NOT an option if you’re already in the chancery position.

Always remember when applying the chancery hold that you will never choke someone out this way. You may be applying significant pressure to one side of the neck, but the trachea is safe and the other side of their neck is comfortably against your side. Pulling hard will prevent them from getting out, but don’t waste your effort on mere pressure.

An assailant is clamping down on your neck. Pulling their arm from this position is difficult, and when they connect their hands it’s impossible. You don’t know when they’re going to punch, and you can’t see very well. You know you won’t suffocate or be thrown, but you also can’t find a way to fight back.

Although it seems like a difficult position to escape, there is a time-tested method to escape the front headlock. If one of your arms is pinned by your opponent’s body, move it behind them. If they’ve got a tight headlock on you, it may already be there. Use the other hand to block their punches. The hand that is on their back goes up, and finds the near-side of the face. Push him away from you, either with the knife-edge of your hand below the chin, or just below the nose, or using the palm of your hand on their face. If your leg is directly behind theirs, they’re likely to fall backwards. If not, you’re free of their arm, and you can follow-up in other ways.

If they seem to be focusing on the hold and not punching you, that frees up your hand to punch for their mark or the groin. The hand that goes around their back can punch the kidneys as an atemi strike to facilitate your escape.

We know that there’s no good throw on the superior side of chancery. But there are other escapes that put the defender in a controlling or winning position.

The most important thing about escaping the front headlock is to stay calm and remember that your opponent has made a mistake. You have time to consider various escapes.

Keep learning about common positions in unarmed fighting from close-range wrestling to medium-range punches and kicks, to long-range stick fighting by learning the world’s first mixed martial art, Bartitsu. You can get started next week (or the first week of any month) with our Fight Like Sherlock Holmes course. It’s a series of 4 weekly classes to teach you the essentials of a scientific approach to personal defense.