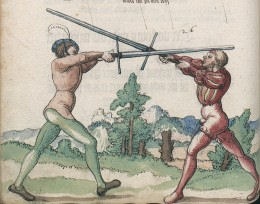 The Mounted Combat checklist for the Blue Spur has five sections:

In the next few months on the Tuesday blog we’ll be covering the checklists for the first two sections, looking at the swordplay requirements from the ground and falsemount, beginning with:

Demonstrate the five methods for winning the crossing in diverse situations.

The five methods are:

Parry: a full or half cut directed at the oncoming attack, with both swords generally meeting at the mezza spada (mid-blade).  A parry will stop the opponent’s sword, usually causing it to rebound to the side it came from.

Deflection: a defence which follows the direction of the oncoming attack (ie, behind the cut) and redirects the opponents blade.  A deflection usually begins in a low guard, such as coda longa e larga or dente al cinghiara. Deflections work best when delivered with the debole (farthest third of the blade) of the false edge, or the mezza spada of the true edge.

Collection: receiving the opponent’s blade into the guard or crosspiece of your sword.  Typically this is done by pointing acrossing the opponent’s line of attack and allowing her sword to slide down your forte (towards the hilt).

Counter-thrust:  the usual follow-up to a collection, a counter-thrust covers the opponent’s sword while delivering a thrust.

Counter-cut:  a cut which defends against the oncoming attack while simultaneouslycutting the oppenent.  Almost any parry in which you have the advantage of a better line (leverage) can also become a counter-cut.

At the Blue Spur level you do not need to demonstrate these in combat.  Instead you will direct your drill partner to deliver specific attacks that you can defend against using the five methods.  In each method we want to see that you

All of these techniques are taught during Mounted Combat workshops, and we review and practise them during our Cavaliere class sword drills.  If there is a method you find you don’t have a handle on, ask your instructor to set you up with a specific drill to practise that defence.

Intro to Mounted Combat Workshop
Sunday 2 February, 10am – 1pm
Red Colt Equestrian Farm Co-op, 12320 No 2 Road, Richmond
cost: $149
A taste of everything in the program.  Learn about grooming and tacking up, get some swordplay fundamentals, and ride a horse with sword in hand.
prerequisites: none

Swordplay in the Salle
Sunday 23 February 1 – 4pm
Academie Duello Centre for Swordplay, 412 W Hastings, Vancouver
cost: $60
Escape the winter weather and practise your mounted combat techniques from the ground and from the falsemount in this special indoor mounted combat session.