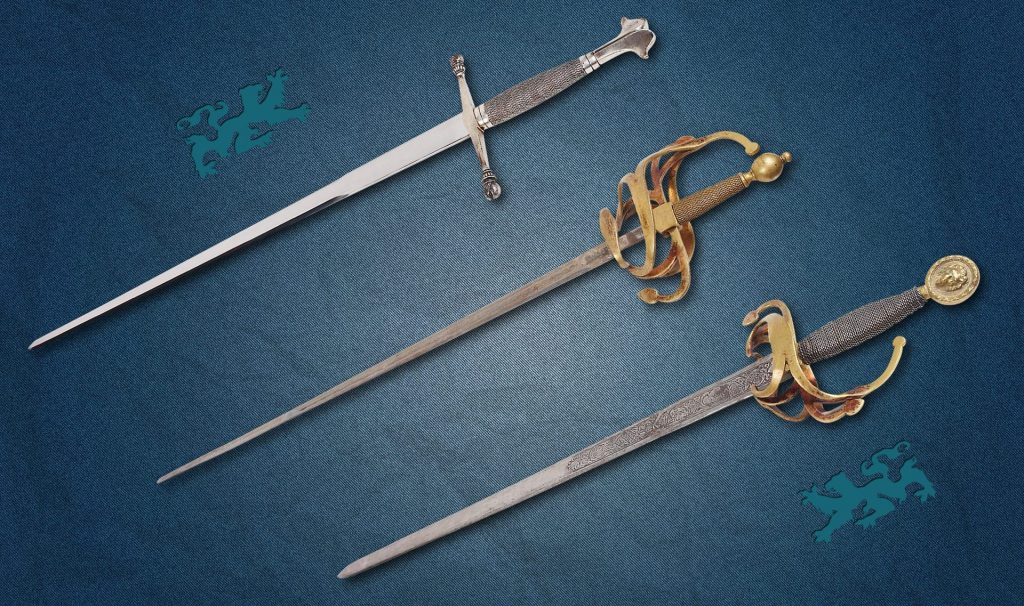 Recently, I was asked why we teach rapier and longsword together in our Instructor Intensives. The questioner postulated that it was like teaching sky diving and skin diving in the same program. Sure rapiers and longswords are both swords but aren’t they as distinct as these two types of “diving”? I think it’s a great question. I’d like to answer it in a few parts across multiple posts.

First, what is the historical precedent for teaching the rapier and longsword together, and for multi-disciplinary approaches in general? Second, how different are the rapier and longsword and what can the lessons from one offer the other? Third, what if they are supremely distinct, does that matter? Is their value in the study of disparate disciplines in parallel to one another? So let’s take our first dive into these questions.

Nowadays, in the world or Historical European Martial Arts, it is not uncommon to meet many practitioners who practice only longsword, or only rapier, or only sabre. Or, even if they are multi-weapon practitioners, they will study distinct and disparate approaches to each weapon where the study, methods, and language are all distinct from one another.

A single weapon focus is certainly much simpler from a first learning perspective. If the weapons are seen as being completely distinct in nature, and a different set of terms and language is used to describe their actions, this is going to be overwhelming for anyone but the most experienced of practitioners.

Yet, when we look back to the written roots of European Martial Arts, in the middle ages, we see a common presentation of multi-weapon systems of combat. 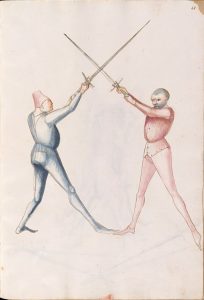 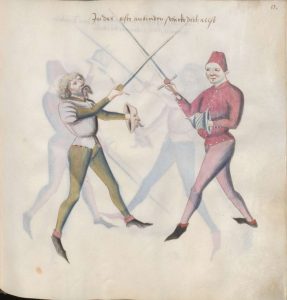 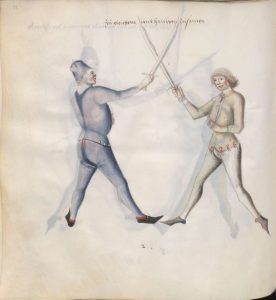 Three similar sword crossings shown with the longsword, sword and buckler, and grosse messer from the the mid 15c works of Paulus Kal. 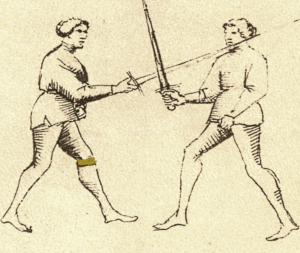 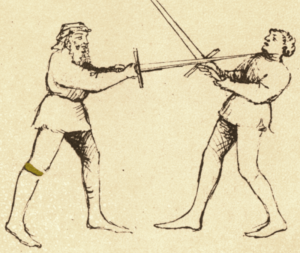 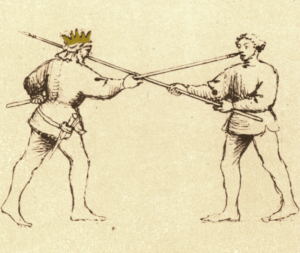 Three similar crossings shown with the sword in one hand, sword in two hands, and spear from the early 15c manuals of Fiore dei Liberi.

These masters present a unified martial art where whatever the tool in-hand, their art prescribed a common strategic, tactical, and biomechanical approach. Each weapon and context necessarily directs that approach, bringing certain principles more greatly to the fore, but in many ways, it is the universality of their art that makes it most useful.

You never know what constraints might be in place when the need for martial resolution arises. You do not know what type of ground you might be on, what types of weapons you might be facing, what weapons you will have at hand, or what constraints might be placed by the court (in the case of judicial dueling). The more flexible and diverse your art the more easily applied it will be and the more easily your science will be able to describe and understand the art of an unfamiliar opponent or armament.

This universality of approach holds well into the Renaissance, and this is where we first see various types of rapiers in the broader systems of historical masters.

All of the Bolognese Masters (Achille Marozzo, Antonio Manciolino, Dall’Aggochie, and the Anonymous) include a diverse array of weapons in their systems including the rapier (which we might now call a sidesword), polearms, and two-handed swords 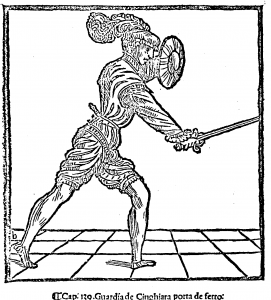 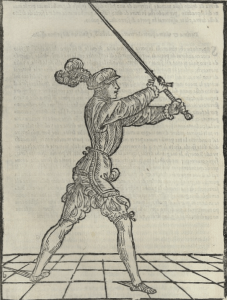 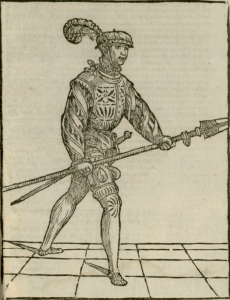 Images from the 1536 manual of Achille Marozzo depicting rapier and buckler, two-handed sword, and partisan.

The weapons they employ use the same guards (with some variations between weapons), manoeuvres (such as stramazonne, mezza volta, thrusts, and various cuts), application of leverage, and most important, the same strategic and tactical thinking.

The same is true of Joachim Meyer who wrote at least three manuals between 1560 and 1570 in Germany. Meyer brings the early rapier into a system that includes the two-handed sword, dussack, dagger, and polearms. Interestingly at the end of the rapier system Joachim tells his readers to use the rapier, and all weapons, in the same manner: extended with the point directed at the opponent (“extended, straight, and firm parrying”). Here is the full text:

“When find yourself in rapier combat or any other weapon, then approach him with extended, straight, and firm parrying, and take heed what he will execute against you and from which side he will cut or thrust in. From whichever side he sends in his cut, catch and parry his cut, and cut or thrust in at him to the same side from which he has sent in his cut, before he has entirely finished it, or at least before he has recovered from it again.”  -Joachim Meyer, 1570, 2.98v

This universality persists throughout writing in Western Europe even as the practical battlefield, or self-defense use, of multiple weapons diminishes. La Verdadera Destreza was an art and science of fencing developed within the Iberian peninsula that focused primarily on the rapier but was applied to a diversity of weapons, by its many adherents, that included polearms, flail, and montante (a large two-handed sword). Destreza was intended as a universal method that could be applied to any armament or context. It was also seen more broadly as a way to learn and practice a broader set of humanist ideals.

There is also a pedagogical and practice payoff. When there is a requirement in your martial life to use and be proficient with multiple weapons, having a unified approach to their use means that all of your practice time is relevant, regardless of which weapon you’re training within the moment. It also allows a teacher to reinforce and expand a student’s understanding of given principles, tactical and physical, by demonstrating them across disciplines.

The lessons that a particular master wanted us to glean from one weapon and apply to another is not always as clear as Meyer’s advice in his section on the rapier, but through inter-disciplinary study the commonalities can certainly become clear to you. In part 2 of this series, I’ll explore the connections between the longsword and rapier specifically, and why I think they’re excellent cross-training companions.

Registration for the Academie Duello Rapier and Longsword Instructor Intensive for March 5-9, 2018 is now open! This is a challenging, inspiring, and empowering experience for anyone seeking to master these arts or teach them.

Join me in Vancouver by registering here.