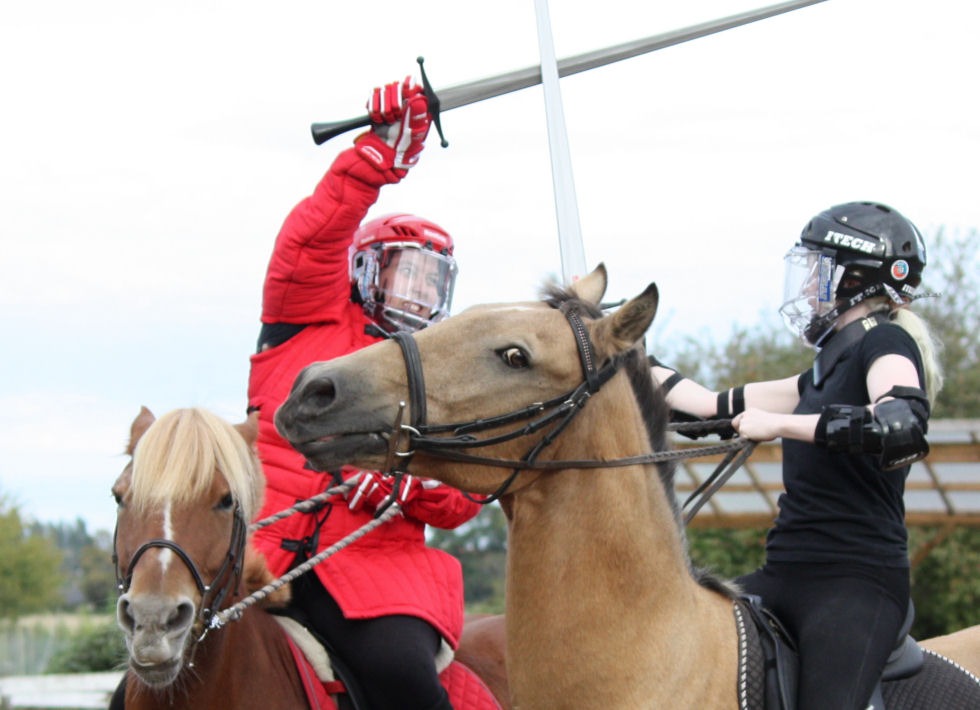 Our annual mounted combat symposium has come and gone, and what a wonderful weekend it was!  The sun smiled kindly on us for the Friday and Saturday of Mounted Combat, Horseback Archery, Classical Riding, Ballet and Mounted Games, and by Sunday those of us competing in the tournament were grateful for some cooler, cloudy skies!

There were seven pairs competing in the Grooms’ round this year, and our judges Isabel and Eleanor were impressed with the overall turnout.  For the first time ever, all seven teams scored over 40 points out of a possible 50, and there was only a difference of 0.5 points between first and second place!

The team games were Bending, 2-flag and Stick-pegging, and the team with the fastest time was awarded 4 points, the second fastest 3 points, etc.

The archery competition consisted of a single timed run.  The riders had 2 arrows each, but only needed to hit the target with one arrow and then cross the finish line.  If no arrow hit the target, the rider was eliminated.  Fastest time won.

The games were Rings, Balloon, and Quintain.  Like the team games, the fastest time won each race and riders were awarded points for placings, with the maximum points for each round being 7.

Our Spur Tournament is open only to those who have earned the rank of Green Spur or higher within the program.  This year we had five new Green Spurs to award to Christian Deron, Stephanie Laversin, Ben Davis, Tracey Leacock and Laura Ambrosiano.  These combatants deserve particular kudos for riding into the combat ring with their spurs so fresh and shiny.  The tournament consisted of a round robin between eight participants.

The overall champion was the competitor with the highest point total for the day.  Congratulations to:

Thank you to everyone who made this weekend possible:  our fabulous instructors Veli, Rob, Zoltan, Peter, Jenn V, Greg, Devon, Isabel, Eleanor and Kate; the hard-working volunteers, before and during the event, Ben, Nicole, Margaret, Britt, Jay, Alicia, Allie, Christine and everyone who stepped in to help with equipment, horses, and the concession; Jenn M, Kelli and Steph for lending their horses, and of course to all our participants for being such diligent students and super competitors!

Congratulations to everyone who participated in the tournament and the two days of workshops leading up to it.  It was an amazing weekend of mounted skill at arms and we are extraordinarily proud of the depth of talent growing in the program.

No time to rest on your laurels!  Riding and Horsemanship classes start up again on Monday September 21st.  There are only four spaces in the Level 1-2 classes, and four spaces in Level 3+.  If you miss out on a Monday evening spot, there will be Sunday classes starting again in October, which will include Riding, Horsemanship and Mounted Combat.  There is still plenty of good riding left in the year, and this is a great time to tune up before the winter doldrums hit.  See the Workshops Calendar for details.