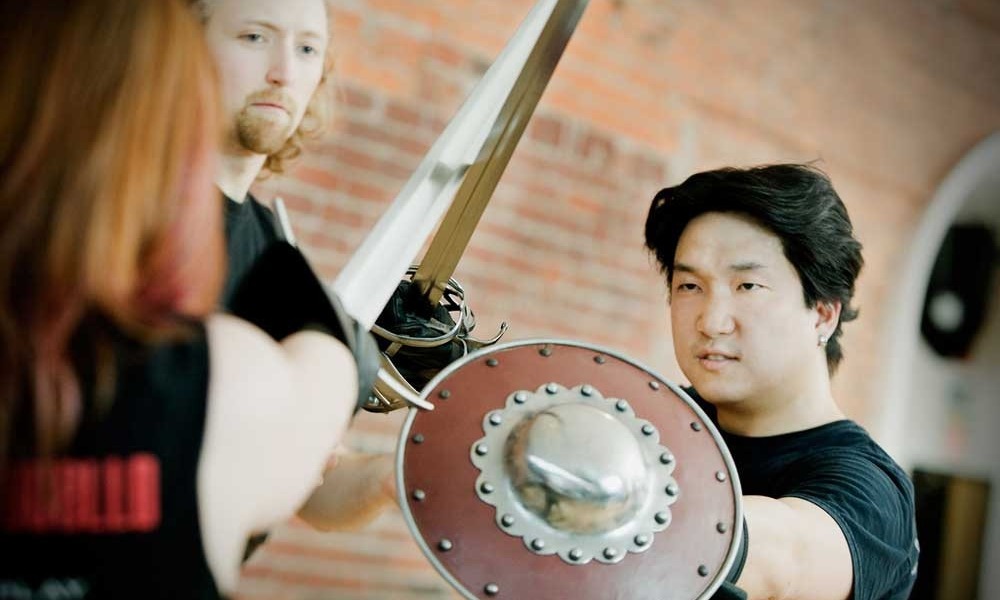 What makes a technique in swordplay appear graceful, fast, and — most of all — effective, is usually the efficiency and precision of the movement. Being able to perform a technique with the least amount of extra movement and in a manner that does the job as directly as possible is essential to high level practice.

Use the following paradigm when teaching a technique for the first time and when correcting or refining a technique to increase its effectiveness: aim to make it crisp, then smooth, and then quick. The three stages build on one another as you will see below.

Break a technique down into discrete pieces that can be learned as a stop and start chain. Even the simplest technique can be thought of as a series of individual movements. Pieces of that technique could be identified by the parts of the body that are involved from the fastest to the slowest. Efficient techniques start with manipulation of the weapon with the hands. The next piece most likely involves the elbow and arms in extension or elevation. Then the shoulders, body, and finally feet. Each piece should have a precise start and end point as well as an objective.

A fencing movement that involves changing lines (moving the sword from one side of the opponent’s weapon to the other) and then attacking on the new line, might be broken into three pieces:

You can now execute each piece ensuring that the start and end positions are exact and that their objectives are met. Avoid blending together the pieces until each one is being executed precisely.

Once you have built proficiency with the broken down movement, gradually reduce the size of the pause between each piece. Through this process you will blend together each piece without losing their order or position.

Execute at a speed that allows for a smooth, consistent, and precise execution, eliminating all hesitations between movements. If the movement begins to lose its precision, break it back down into components again to make corrections.

Often a failure in a technique comes when one of the stages is lost or executed in the incorrect order. By alternating between crispness and smoothness these problems can be identified and overcome within one’s motor programming.

When a technique can be executed effectively and smoothly at a slow speed, gradually increase its speed toward combat level. If at any point precision, order, or consistency is lost, lower the speed again. It’s useful to work on the edge where you are able to execute a technique properly with concentration but before it breaks down. Here consistency of action is important. Make sure that as you add speed you don’t unintentionally add artificial upward spikes in movement speed or unintended pauses.

Once fundamental precision is achieved, it’s important to bring the technique out of its mechanical bubble and start testing it in a more contextual environment. As you identify challenges in this new space, you can bring them back to this three-stage process to diagnose and perfect the technique further.