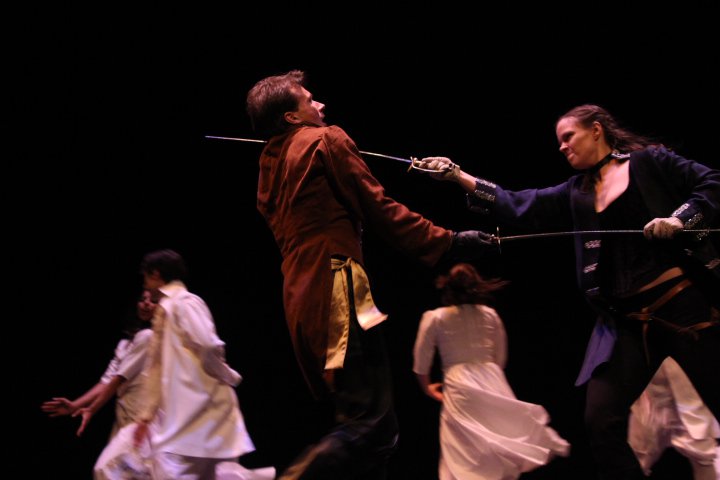 I have been musing for the last year or so about the Art of Stage Combat. The question that keeps rolling around in my head is a combination of these elements:

What are Great Stage Fights?

I intended today to give you a list of plays that have great fights written into them. My students need fight scenes for their certifications, so I have a large list, and I’m always looking for more.

And people always ask me what my favourite fight is.

I’m still exploring the question “What makes a fight great?”

Researching and thinking, I happened to read a few posts on Casey’s blog, which redirected my ideas.

Casey is a great instructor, and I had the benefit of learning beside her and from her at Rapier Wit and other events. She is a fun and generous person, clear and clever communicator and inspiring. Her blog is long-form writing (like mine) and I recommend it to anyone interested in stage combat.

In both posts, she gives you clear ideas about how the industry works for stage and screen, and how the performer must be a collaborator, a creative artist, and a virtuoso performer.

The nagging issue in my mind is Art. Despite emphasizing the difficulty and creative effort required for stage combat, Casey does not address how a fight performer or a fight director is an artist. They way they fit into a stage production or a film is described in terms of a skilled craftsman.

Although she may disagree, I’m not trying to start a debate with her in blog form, only trying to start from her ideas to what I perceive is the real gaping hole in our profession.

The two complaints of combatants are these:

Although I’ve complained about these things myself, it is not a matter of marketing or education. It is because for many of us, the art is empty.

If a Fight Director’s role is to choreograph what a director wants to see… if a combatant’s role is to perform precise fight motions with precision and endurance… if we continue to accept that fight choreography exists only to augment a project whose fight could be staged in a thousand other ways… then stage combat is not an art.

All arts begin as practical skills, then become crafts which eventually compete for prizes, then become arts. In the same society, people frequently

For example: the art of archery began as a practical hunting skill, then to competitions at targets, then to a meditative and philosophical practice in Japanese Kyudo.

Painting started as pictorial messages on cave walls, then as decoration with the best designs selling in the marketplace, then became Impressionism, Cubism and Post-Modern when the idea of the painting went beyond the representation.

How do you learn an art? You must start as a craftsman and improve your abilities until you can express your ideas within your chosen art form.

In other words, there is more to art than performing well, even creating things that others cannot because of your trained precision. Art is communication of ideas, especially those ideas that are hard to express in words.

In practical terms, everyone accepts an art when the upper classes pay a lot of money to see the art in its pure form. Sorry, that seems to be a good working definition.

Everybody thinks it’s fun to dance and sing and tell stories. When we pay to see them done by experts (not in competition), then it’s an art and those being paid to perform are artists.

Does that make sports an art? Close. We pay to see something fun done by experts, but we only watch sports in competition form. Therefore it’s no better than watching your nephew in the neighbourhood game. Get the idea? Archery is an art in Japan, because they elevated it above competition. Strangely, we lower the art of gymnastics and figure skating, which should be arts, by assigning points for artistic merit.

Does that make martial arts an art? We pay to see it done by experts… and we do watch them in competition, but we also watch them in films where they are collaborating to make awesome effects. I’d say yes.

For stage combat to become an art, we need to create a new form (maybe give it a fancy name) which is based entirely on virtuoso fighting that the elite will pay a lot to see.

It’s not like this hasn’t existed before. Beijing Opera is a prime example of a Fighting Art. But it’s very specific, and doesn’t appeal to the North American culture. Can we make a “Canadian Opera”? By which I mean “a Western martial arts focused art form that people will beg to see?”

It would be awesome to achieve that.

Casey and I (along with a dozen other performers of dance and stage combat) may have achieved Art under Todd Campbell in La Maupin.

Perhaps we should rather approach Combat Art from the film perspective to create this new art form. Action directors have made many attempts to translate the fight into moments of art within movies.

However, we should keep in mind that these remain fights within longer movies. Can we make the art of film fighting into a ballet analogue where every moment is an example of strength, flexibility, coordination and group cooperation? Can we make it into an Impressionist analogue to truly explore the experience of the fighter as it changes throughout the conflict?

And how can we achieve those aims through stage combat itself, instead of borrowing from other traditions? I’m thinking that as art, it should not just wait for film tricks (a separate art) to supply them with the next breakthrough in stage combat. Breakthroughs in stage combat should be possible within stage combat. I hope that makes sense. Somebody send this article to an Art Professor.

One of the reasons for writing this is to encourage you to think about art as more than great craftsmanship, and apply it to your own study. I want also to talk about interesting possibilities instead of serving the needs of others in the film industry. Most of all, I want to expand stage combat into new realms, and advocate for stage combat.

Yesterday, I was teaching at a high school, where another guest artist asked me “Why do you teach violence?” And I think she was under the impression that I was not considering the ethics of my art. I answered her clearly and positively, and she was suddenly a huge supporter.

You should be able to answer the question I was posed. It’s good to have to justify why you do your job. It’s even better to have to fight for your profession because you articulate why your job is important. Advocacy is good for your self-esteem.

Art is tough. Be excellent first, then elevate your practice by making it meaningful. It’s a physical, mental and emotional journey.

So I don’t use my blog for discussion, so if you want to talk about these subjects, my Twitter is @TheSwordIsInYou, and my Facebook is PlayFighting. I’m probably going to start conversations with people at the FDC Nationals in Montreal this year, including Casey (@CaseyHudecki), Daniel Levinson (www.RapierWit.com), and others.