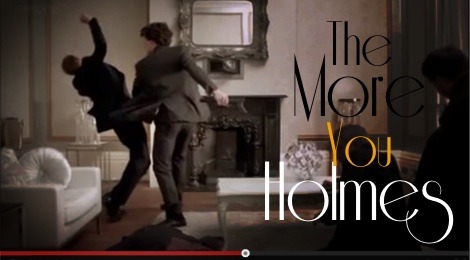 For the Sherlock fans, I direct you to Bonzuko the webpage of fight director Jenn Zuko-Boughn. She has a regular feature called The More You Holmes, which is a reference to the 80’s shooting-star factoid segments.

Her explanations of obscure facts in the many Holmes TV series, films and stories are concise and always informative. Here is a great example including some combat:

Reference: In this ep, Sherlock shouts this phrase apparently as a cue to Watson–he detects a trap in Irene Adler’s safe, 20130729-135543.jpgand the phrase “Vatican cameos” is a signal to Watson to drop to the floor. This reference is twofold: one, it’s a reference to a never-published story that Holmes mentions in The Hound of the Baskervilles, and so we can assume that something about that adventure might be a sort of private code between the two of them. But it should also be noted that “Vatican cameos” was a phrase used in WWII by British military. It signified that an armed civilian has entered a military base.

This is the accompanying video:

Don’t miss our next Umbrella Self-Defense workshop on Sunday 17 November, a very appropriate weapon for the aspiring consulting detective.