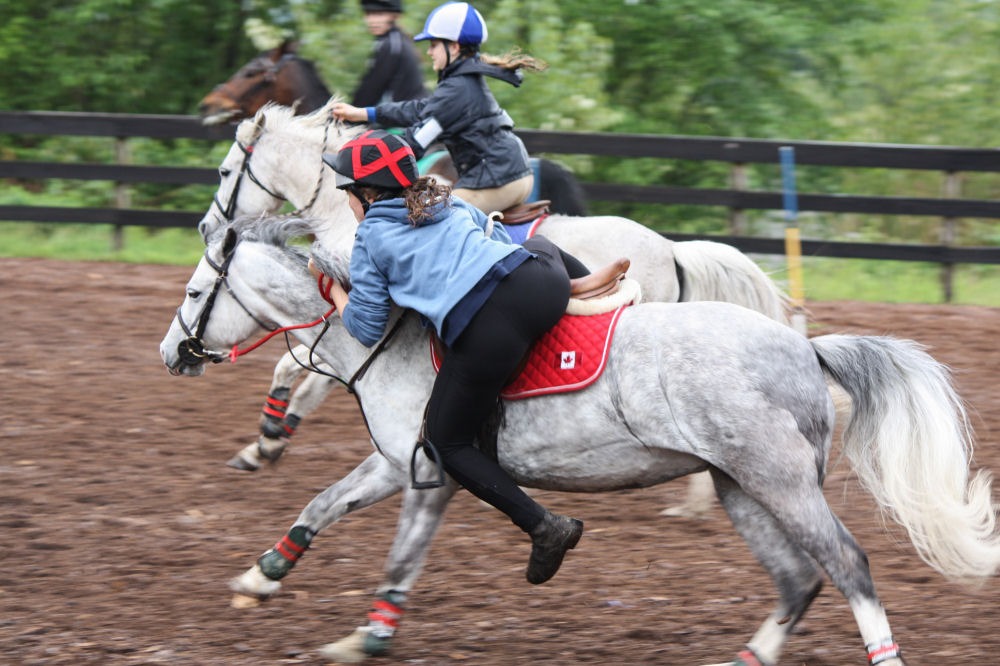 We don’t actually ask you to juggle while riding, but sometimes that’s what it feels like  when we ask you to

8. Pick up an object from a standard, carry at trot to another standard and deposit.

You may wonder what on earth this skill has to do with mounted swordplay, but let’s back up a bit. 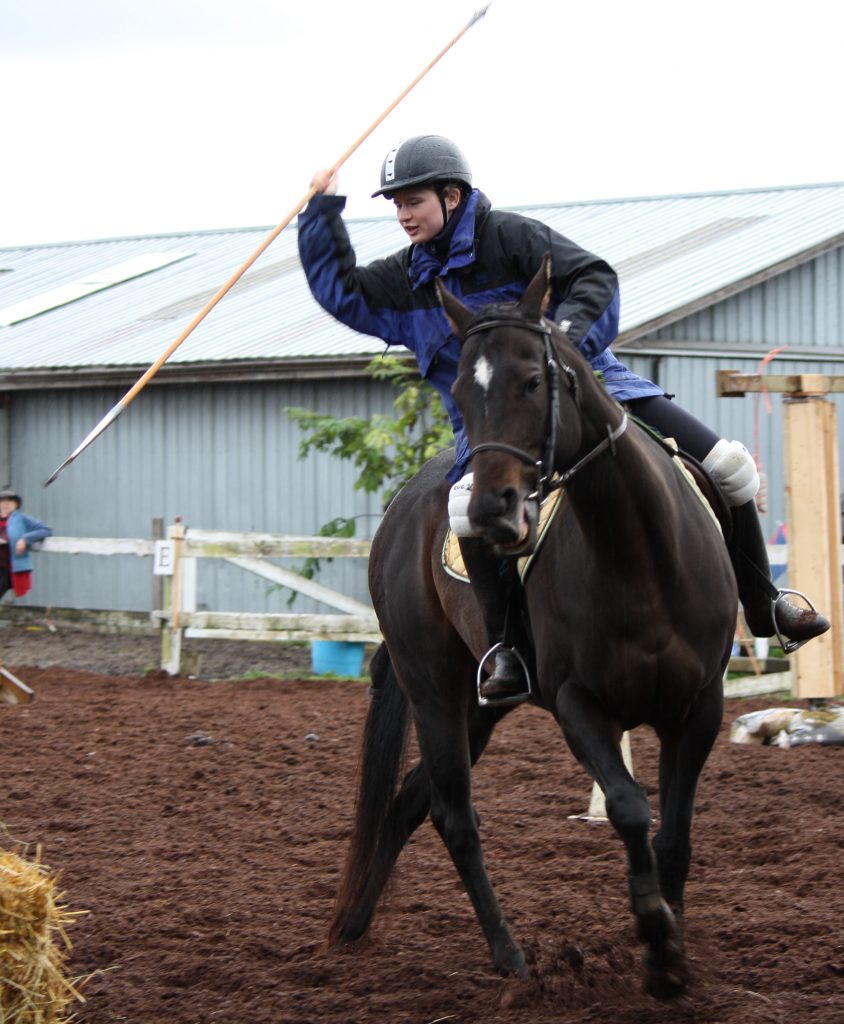 As part of our training, we practise mounted games.  Some of these have very obvious application to mounted combat, such as striking the quintain, cutting at blocks, or spearing rings.  Others, which involve picking up and moving flags, balls and other objects are not so clear in their martial application.  However, these games all descend from cavalry training, and are designed to improve the mounted soldier’s skill in the saddle. 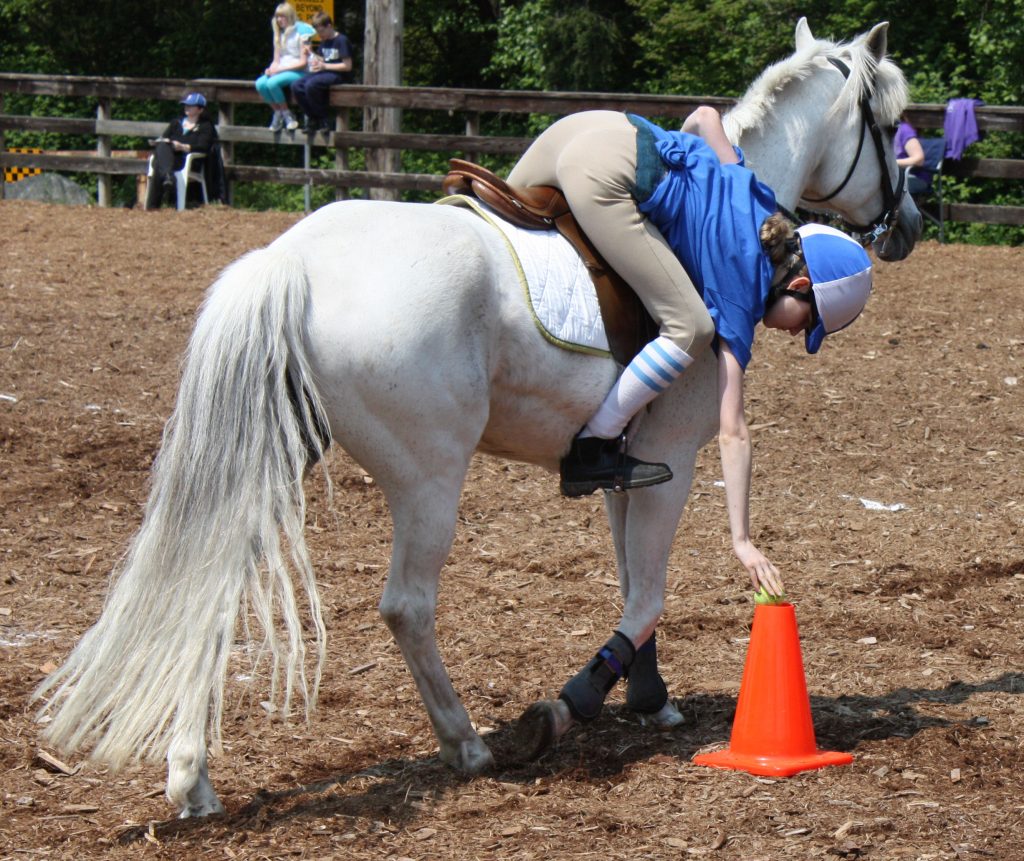 Hand-eye coordination:  being able to accurately place a flag into one cone and snatch a ball from another at full gallop requires the kind of accuracy any mounted spear- or swordsman would be proud of.

Independent seat: many of these games require reaching low to the ground or far from the saddle.  A rider who is not secure in her seat will soon find herself making acquaintance with the ground, or sending her mount in unintended directions.  The ability to stay centred and secure in the saddle while the upper body performs completely independent actions is vital when swinging a sword from the saddle.

Speed mounting: at some point when practising mounted games you are going to miss your target, which means you’ll need to dismount and remount as quickly as possible.  Getting back in the saddle if unhorsed is a crucial survival skill to the mounted warrior.  Xenophon counselled training soldiers to vault onto their horses, using spears if necessary; and modern mounted gamers practise the running vault till they are able to bound off and back onto their ponies in a single stride.

Bounceback: as strange as it sounds, the unscheduled dismount is one of the benefits of mounted games.  If you ride, you will fall or be thrown off your horse one of these days.  It happens to everyone, and there’s some truth to the adage you’re not a real rider till you’ve bit the dirt a dozen times.  However, falling off a games pony, even at full gallop, is a lot easier on the mind and body than being bucked off a fractious 17hh dressage mount, or thrown into a fence when your jumper decides to prop or stop.  Whether its the frequent dismounting (intended or not),  the ability to find their seat again at speed, or simply the adrenaline and fun of the games, mounted gamers seem to develop a resilience that lets them hit the ground laughing and be back in the saddle ready for the next race.

Not that we expect you to be doing high-speed pick-ups or running vaults yet.  But start practising by moving objects such as cones, balls, whips, or swords from one place to another, and you’ll soon find you develop a dexterity around managing your reins, the object, and your horse that will serve you in good stead later on.

Winding up the Season

We had yet another glorious day for our last Mounted Combat Workshop for the year.  We may run an indoor workshop sometime in December or January, but barring that, the next Intro to Mounted Combat and Mounted Combat workshops will happen the first Sunday in February.

There are, however, three Cavaliere classes left in 2013.  As a special bonus to finish up the year we are including all three of these in the Integrated package.  Sign up today to get your riding, horsemanship and sword drills in before we wrap up!

The last Open Barn for 2013 will be Sunday December 1st, from 1-4pm, in conjunction with another work party to finish up winterizing the barn.  As always Open Barn is free to attend, and the cost for using a school horse is only $10.