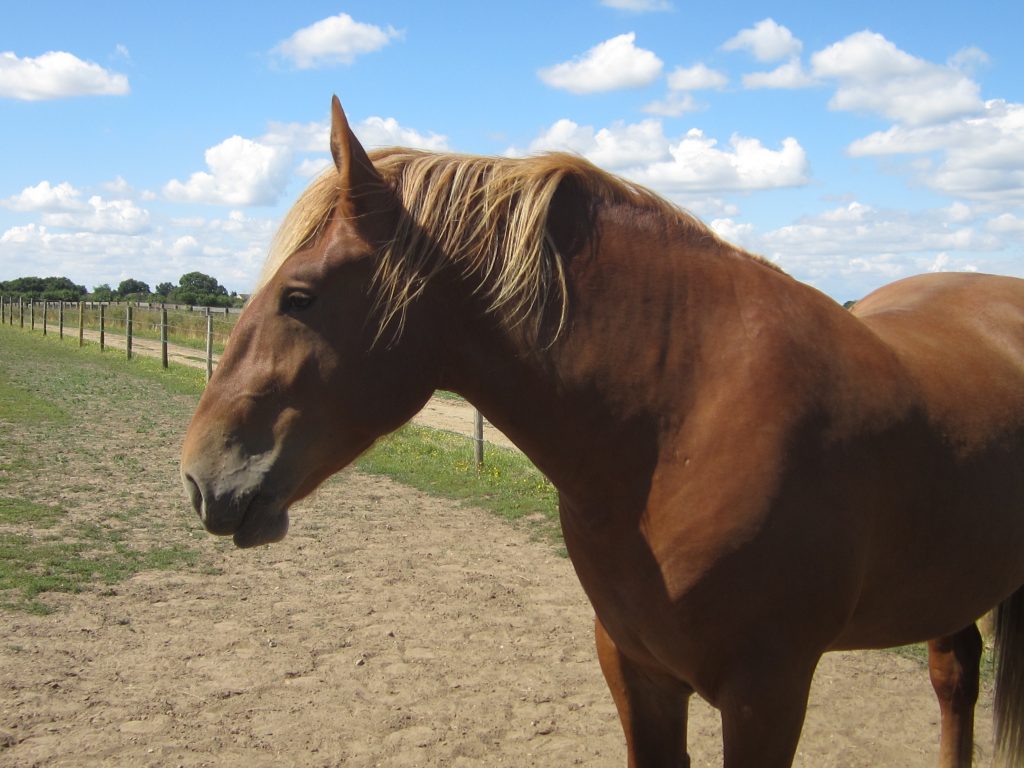 This week I visited the Suffolk Punch Trust in Woodbridge, UK.  The Suffolk Punch is the oldest registered horse breed in England, being first recorded as the Suffolk Sorrel in the 16th century.  This magnificent animal is a heavy-bodied, medium-height draught horse, bred for farm work and hauling.  Its broad chest, steep shoulder, and uphill build coupled with powerful hindquarters make it beautifully suited to pulling heavy loads.

However, if you wanted to ride one, you would find its complete lack of withers would make saddle-fitting a nightmare (industrial-strength crupper needed!), its long back would make it less able to carry a rider, its thick throatlatch would make it unsupple, and its long cannons in proportion to forearms would make it a rough ride indeed.  You might as well saddle a rhino.

And yet, Hollywood, mediaeval dinner-theatre, and popular artwork from the 19th century onward would have you believe knights rode into battle on draught breeds.  This is 99% piffle with a grain of truth.  The truth is that some draught horses, such as the Percheron and Friesian, were developed from war-horse stock.  However, over the years the Percheron was bred to be heavier for farm work, and later for meat; while the Friesian was bred to be a carriage-horse with flashy knee action and a high head.*  None of these characteristics make a good riding horse, never mind a warhorse.

People can and do ride draught horses.  They are impressive to look at, and some heavier riders feel better on a larger horse (though they should take care to choose a shorter-coupled breed, like the Clydesdale or Percheron).  For jousting, which only requires a straight-line charge, they are more than up to the task.  But they will never, in their pure-bred form, have the agility and suppleness necessary for mounted combat.

Breeds which are closest to the knight's destrier, as determined by drawings, skeletons, and mediaeval tack are of the baroque, not the draft type.  These include Lippizaner, Knabstrupper, Lusitano, and our own Canadian Horse, among others.

*Note that modern breeders of Friesians are working towards a riding horse, and are having considerable success in the dressage ring.

Get ready for Carosella!

Riding & Horsemanship classes run in 6 week series.  There is drop-in space in the current Monday evening series, and registration is open for the upcoming Saturday series.

For information, schedules and registration see our Carosella pages.