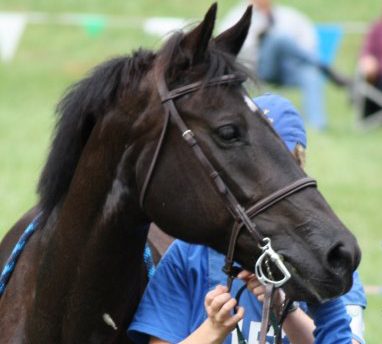 For Level 4 Horsemanship you will need to be able to fit not just your own tack, but other common parts of saddlery as well.  This week we’ll consider nosebands.

The variety of nosebands used today is a relatively modern invention. Mediaeval and early modern riders used either a simple cavesson or no noseband at all, and Western bridles usually do not have nosebands.  However, in both these cases the horses are wearing long-shanked curb bits, which prevent the sideways movement of the bit in the mouth.  In addition, the curb chain or chin strap of the bit prevents the horse from gaping his mouth.  With a snaffle, the noseband is useful and important for the following reasons.

Safety for the horse.  If a horse opens his mouth the snaffle can slide sideways, causing discomfort or even damaging the teeth and sensitive tissues.  The cavesson noseband does not hold the mouth firmly shut, but it prevents him from opening the jaw wide enough to let the bit slide through.  In a rare, but not unheard-of example, if the horse suffers rotational fall while hunting or on a cross-country course, she is far less likely to break her jaw if the mouth is closed than if it is open.  The noseband in this case is like a seatbelt — something you hope you won’t need, but can save your horse’s life.

Safety for others.  In activities such as mounted combat or games when horses are interacting face to face, aggressive horses may need a drop, grakle, or flash to keep them from biting other horses (or riders!).

Acceptance of the bit.  If a horse has become accustomed to avoiding the bit by opening her mouth, crossing her jaw, or putting the tongue over the bit, a drop, flash, or grakle may be a temporary solution.  In the long run however, I prefer to discover and work on the root of the problem (which may or may not have anything to do with the bit itself) and develop willing rather than forced acceptance of the bit.

Control.  The inability to escape the bit can give greater stopping power, as can the nose pressure of a kineton noseband.

However noseband pressure should be considered a last and temporary resort for a strong horse and a nervous rider.  Going back to basics and developing obedience to softer aids will be far more helpful in the long run.

Martingales.  If a standing martingale is used to prevent the horse from raising its head will need to be attached to a cavesson noseband.

This is the most prevalent type of noseband used with a single bridle, and the only type that should be used with a double bridle.

A drop noseband sits below the bit and must be fitted carefully to avoid interfering with the horse’s breathing.  The upper strap must sit four fingers above the nostrils, and the lower one rests in the chin groove.  The upper strap needs to be short enough that the cheekpieces sit well in front of the bit to avoid chafing the lips, and the noseband must be loose enough to allow the horse to relax his jaw, but not so loose that he can cross his jaw or draw back his tongue.

This is a cavesson noseband with an extra strap that fits in below the bit like a drop.  The noseband of the cavesson may be padded for comfort and extra wide to prevent the flash from drawing it down.

This works like a drop, but has upper as well as lower straps that cross on top of the nose.   The cross-over point is usually padded with sheepskin for comfort.  Because the noseband works on the whole jaw rather than just the front, it is particularly effective at preventing jaw-crossing, and because it sits higher than the flash or drop, it is less likely to interfere with breathing and suitable for cross-country work.

The Kineton has metal loops that pass under the bit on each side of an adjustable front strap that must sit four fingers above the nose.  This means that the reins exert pressure on the nose in addition to the action of the bit.  It is useful for a horse that has a dull mouth or who pulls hard.  However it should only be used by experienced riders, as too-harsh use of a kineton can damage the delicate nasal bones.  Note that the kineton has no back strap, and thus will not prevent a horse from opening her jaw, though the presence of the metal sides will prevent the bit sliding and can limit jaw-crossing somewhat.

When choosing a noseband always opt for the gentlest, most comfortable option that will be effective, kind, and safe.

Get ready for Carosella!  Riding & Horsemanship classes run in 6 week series.  There is drop-in space in the current Monday evening series, and registration is open for the upcoming Saturday series.

Three fabulous days of Mounted Combat, Archery and Games!  The dates have been set for September 9th – 11th.  Registration isn’t yet open, but you can look at last year’s schedule to get an idea of what’s on offer, and start planning your training now.

Jennifer Landels heads up Academie Duello's Cavaliere Program. She has been swordfighting since 2008, and riding since before she could walk. She started the program as an excuse to combine those passions.
Read more from Jennifer Landels.
Posting....