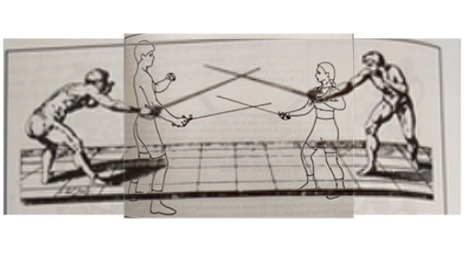 In stage combat, we have three priorities:

The problem with some methods in stage combat that are taught in popular books and in classes worldwide is not the safety. In most cases, those who teach stage combat are so safety-conscious that they rob many of the movements of their authenticity. I don’t advocate being less safe, of course. What I’m arguing is that we should only accept stage combat techniques that fulfill both goals of safety and simulation, otherwise they should be rejected.

In terms of authenticity, many productions request historical accuracy in their sword fighting. At Academie Duello, we have studied the historical masters to a degree that we actually compete in historical european martial arts (HEMA), so we know what the real thing looks like. Just as any generalist in stage combat might imitate karate, it might be wiser for a production to hire a fight choreographer who actually has a high level of karate training if the authenticity of the karate is important for you. Similarly, if historically accurate swordplay is important to your production, a generalist stage combat choreographer may be fine, but an expert in Western Martial Arts could be better.

Make no mistake, your first priority should be to hire a fight choreographer who has the proper training and certifications in stage combat. Actors get injured more frequently when the fight director has too much martial training and too little theatrical training. The ability to deliver on our third priority, storytelling, is only possible with an understanding of the history of theatre and film, experience with different creative traditions, and working on various stage configurations.

Whether you’re learning stage combat in a school or from a book, it may be frustrating to compare historical fencing to stage combat. One example is from Actors on Guard by Dale Anthony Girard, showing these illustrations:

Why bother to show us the historical position, and then instruct the student to take a different position? There is no explanation why the stance is different.

I think there are two misconceptions that lead to the change in posture.

First, there is a mistaken belief that those who practiced sword fighting in history spent their entire lives practicing their technique, but we need to teach actors in a limited time. If the renaissance fighter had years of daily practice to perfect the difficult and precise body positions, we can’t teach those to the actor because they only have a few weeks to practice and rehearse their stage fight.

This simply isn’t the case. Many soldiers were taught their technique just before battle, and some gentlemen rushed to fencing masters because they were challenged to a duel the next morning, and needed a “crash course”. The methods and positions advocated by those masters were used to teach efficiently, so that the fighter in the stressful position of defending their life could easily remember and use the techniques well.

The second misconception is that historical sword fighting is too dangerous because it aims to kill the opponent as quickly as possible. We wouldn’t, therefore, want to use the historical positions because it’s too unsafe.

Remember that “fencing” comes from the word “defence” because the sword fighter’s first priority is to keep themselves alive. It doesn’t matter if you kill your foe if they also kill you. When we practice competitive sword fighting, simultaneous hits are not “double-wins”. They are “double-losses”. In this way, the historical master is primarily tasked with protecting the student’s life, just as the stage combat teacher is.

And I think it’s hubris to believe that we know better how to keep a fighter safe than someone who devoted their life to teaching people to defend themselves with a sword.

Apart from these mistakes in understanding the historical practice of swordplay, there are two performance and rehearsal reasons why a simplified upright body position and a reliance on basic attack-parry (dui tempi) actions are overused in stage combat.

First, it makes the writing of sequence easier for the choreographer, and the interpretation of written choreography easier for the actor. Anyone who has tried to annotate wrestling knows that explaining what both fighters are doing with both hands is confusing and exhausting. Sword fighting can, at least, be simpler if each moment only one thing is happening. However, in an age of cheap video storage, we don’t need to rely on written choreography. The fight director should record themselves performing the actions for the actors to imitate. That way, perfect posture and timing can be imitated rather than interpreted from the page.

Second, there is a patronizing attitude among many fight choreographers that the audience will not understand the fight if there are too many simultaneous actions or confusing postures. I’ve expressed this excuse myself, especially when teaching stage combat to fighters with a lot of experience in historical fencing. “The audience won’t know who’s attacking!” I’ve said. Actually, the audience knows full well that they are both attacking, and they’re not mistaken. So where’s the problem?

Some claim that the problem is the ability to tell the story of the fight, our third priority of stage combat. I agree that it is easier to tell a story when using single actions at each moment. However, I’m starting to believe that if the actors understand their character’s goals and their current feelings of fear or aggression or frustration, then that speaks louder than the metronomic back and forth of a “traditional” sword fight.

If you’ve read this far, I have a bonus tip for you actor-combatants and fight directors. Consider the most entertaining and award-winning fights. I think the things they really have in common are:

What does this tell us about theatrical swordplay? It’s not about clear swordplay. As long as you’re using safe techniques, why shy away from historically authentic actions? I want my actors to emulate those engraved illustrations, and if contratempo or simultaneous action occurs, let’s explore that. More importantly, let’s try to trust the audience and our actors with challenging historical strategies and raise our level of performance at the same time.

Consider it a challenge.