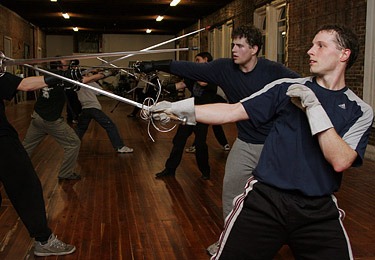 This has got to be one of my favourite weeks in our Mastery program curriculum but I’m a complete subtleties geek and I love the rapier — a weapon that is all about subtleties.  In Green Cord (level 1) we’re using the cut to stringere the opponent’s weapon (perhaps the least subtle of this week’s topics). In Blue Cord (level 2) we’re practicing movement off the line both into and away from the sword, this is where I love seeing how subtle changes in position in relation to your opponent make huge changes in their options. In Red Cord (level 3) we’re exploring Mezzo Tempo — essentially ways to strike your opponent in the middle of their actions.
Don’t worry I love the longsword as well and this week we’re exploring Dui Tempi (the use of two actions to setup and strike the opponent). These actions will tie closely into our Prima Tempo (striking in one tempo) actions of last week. It’s good stuff.
Enjoy your training this week!

Provoking your opponent to attack you in prima tempo is not all bad, provided you’re prepared to make a proper defence. In this week’s class we look at how to setup opportunities to parry or deflect the opponent’s attack and counter-attack in a way that is challenging to defend against.

The cut can be a powerful tool for gaining control of an opponent’s weapon. The half cut can be used to beat the sword aside and leave the opponent open to a thrust, the full cut can be used to clear the weapon completely and allow you to pass in past its deadly point and deliver a deadly cut to the opponent. This week we explore both possibilities.

Moving off the straight line from your opponent can increase your advantage of crossing, increase the proportion of their action in relation to yours, make their next motion more predictable, and give you access to targets you would not necessarily see on the straight line.  This week we explore how to both move away from the opponent’s sword as well as toward it as a means of stringering in a whole new non-linear fashion.

In this week’s class we look not just at the simple form of mezzo tempo, striking during a preparation of the sword, but through a diverse set of actions from withdrawing, disengaging, preparations, and fixes. After we get those in hand we’ll look at how we can defend ourselves from the shortest of the tempos.